Main Blog Eat to live or live to eat? 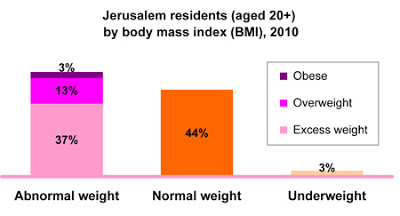 The people of Israel love to eat, and to eat a lot. This statement is especially true during the holiday season, when – even if we want to – it is very hard to resist the many temptations spread before us on the holiday table. And why should we resist anyway? After all, the holidays are a time of festivities, and what is more festive than a good meal? Thus, even if we maintain a balanced nutrition throughout most of the year, we’re allowed to go a little crazy during the holidays. In any case we’re planning to go on a diet after the holidays, right?

So, now it’s after the holidays. Some of us are carrying a few extra kilograms. In this context the Social Survey of the Central Bureau of Statistics provides interesting data regarding the weight of Jerusalem residents and their attitude towards dieting.

The ratio of a person’s height to weight (BMI – Body Mass Index) makes it possible to measure whether the person is underweight or of normal weight, or is carrying excess weight, overweight, or obese. The survey shows that during 2010, 51% of the residents of Jerusalem (aged 20 and above) carried excess weight or were overweight or obese. In comparison, this figure was 59% for Haifa residents, 52% for Rishon LeZion residents, 50% for Israel’s residents, and 37% for Tel Aviv residents.

It is interesting to note that Jerusalemites were satisfied with their weight in comparison to the residents of other major cities. When asked whether they would like to lose weight, the percentage of Jerusalemites who responded affirmatively was 41%. In comparison, this figure was 52% for Tel Aviv residents, 54% for Israel 59% for Haifa, and 60% for Rishon LeZion.

Among the residents of Jerusalem and Haifa who responded that they would like to lose weight or maintain their current weight, 22% indicated that are dieting. The percentage of dieters among residents of Israel and Tel Aviv was 24%, and among Rishon LeZion residents this figure was 38%. The survey also revealed that among Israel’s residents who reported that they are dieting, 27% received their basic guidelines from a dietician, 18% from family or acquaintances, 15% from books, the internet, or professional material, and 10% from a physician.