Main Blog The apartment is always bigger on the other side

A few months ago the 2017 Arnona (municipal tax) invoice landed in our mailboxes.  What is the trend of apartment sizes in Jerusalem?  What is the history of those trends? 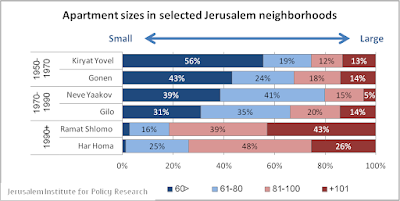 A few months ago the 2017 Arnona (municipal tax) invoice landed in our mailboxes. Next to the total payment due, the invoice notes the size of our apartment, at least as it appears on the municipal registry.

Arnona taxes are one of the main revenue sources for local authorities in Israel, enabling a range of services for residents. Besides size of property, what determines Arnona rates is the property’s use, namely, residential, commercial, services, and the like. Jerusalem has four Arnona districts, each with a different rate per square meter.

As a general trend, apartment sizes in Israel have been steadily increasing over the years. Crumbling public housing, where three children shared a bedroom, might have sufficed in the past, but today every toddler demands a private room. Moreover, living rooms have become a permanent and ever-expanding fixture. And why make do with one bathroom, when we can have two? It is interesting to look at the repercussions of this trend for planning in Jerusalem.

Residential buildings constructed in the 1950s and 1960s offered relatively small apartments. The times demanded housing for hundreds of thousands of new immigrants, and the budget was scant. As of 2015, 56% of the apartments in Kiryat Yovel, 34% in Kiryat Menachem and Ir Ganim, and 43% in the Gonen (Katamon) neighborhoods (A-I) were smaller than 60 square meters (m2).

A decade later, in the 1970s and 1980s, there began to be constructed the large satellite neighborhoods, designed in advance with larger apartments. In 2015, 54% of apartments in the French Hill, 55% in Gilo, and 57% in Neve Yaakov were 61-100 m2 in size. In Ramat Eshkol, another neighborhood constructed during this period, about 60% of the apartments were in this size range. Interestingly, apartment sizes vary among the neighborhoods built during those years because the planners wanted to attract diverse groups. Apartments in the range of 61-80 m2 account for 41% in Neve Yaakov, 40% in Ramat Eshkol, and only 20% in the French Hill.

Jumping forward to the 1990s and 2000s, the trend towards larger apartments continues unimpeded. In two neighborhoods built during those years, Ramat Shlomo and Har Homa, most apartments exceed 80 m2 (82% and 74%, respectively). For the sake of comparison, only 3% of apartments in Ramat Shlomo and 2% in Har Homa are smaller than 60 m2.

So how big will apartments be in years to come?