Main Publications Going against the Wind: The Role of NGOs in Jerusalem under an Ongoing Conflict 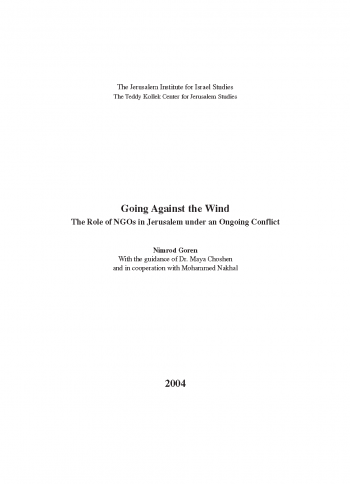 From March till July 2002, research has been conducted at the Jerusalem Institute for Israel Studies, aimed at assessing the role of civil society in Jerusalem in improving relations between Israelis and Palestinians in the city and in creating coexistence based on tolerance, mutual understanding and discourse.

The research attempted to chart the joint Israeli-Palestinian activities taking place in Jerusalem; discuss their various characteristics; analyze the change that occurred in the scope of these activities following the al-Aqsa Intifada; identify the factors influencing the degree of success or failure of the activities in surviving the present violent clash, and formulate recommendations for encouraging additional activities and supporting existing ones.

Jerusalem, despite the separation barrier built within it, is the single place where Israelis and Palestinians can still meet relatively easily. However, many emotional barriers separate the two populations. Barriers of fear, hatred and prejudice cause estrangement and tension between the populations who, under different circumstances, could have served as a model for Palestinian-Israeli coexistence. Despite their physical proximity, the two separate ethnic groups living in the city enjoy but few points of contact. The potential for friction between the groups, having a direct connection to the regional political-security reality, gives the tone to their relations today.

It does not, however, necessarily have to be so. There are many individuals and groups in the city who are trying to change this reality, and fashion a different structure of relations between Palestinian and Israeli inhabitants: a structure creating a positive public atmosphere toward attempts at reconciliation and peace-making in the city and overall, that will bring about an atmosphere more conducive toward achieving a political settlement of compromise, and aid in successfully applying such a settlement.