What Might Happen if Palestinians Start Voting in Jerusalem Municipal Elections?

Main Publications What Might Happen if Palestinians Start Voting in Jerusalem Municipal Elections? 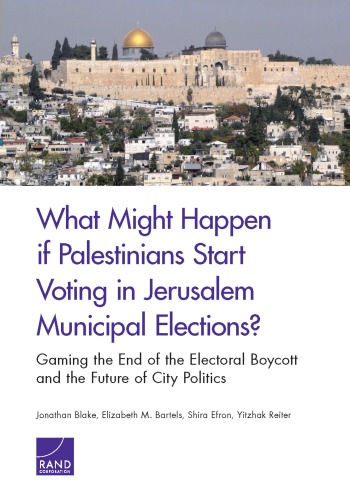 Gaming the End of the Electoral Boycott and the Future of City Politics:

Since Israel’s annexation of East Jerusalem after the 1967 war, the vast majority of Palestinian residents of the city have boycotted participation in municipal elections to avoid legitimating Israeli rule. Nevertheless, recent polls suggest that some Palestinians living in East Jerusalem might be warming to the idea of  voting in the city’s elections. To examine possible consequences of Jerusalem’s Palestinians ending their electoral boycott, a team from the  RAND Corporation conducted a seminar-style game in Jerusalem in partnership with the Jerusalem Institute for Policy Research.The game, held in July 2018, involved Israeli and Palestinian policy experts from Jerusalem representing various stakeholders in the city’s politics and governance simulating multiple scenarios that diverge from the status quo. The results of the game suggest that the Israeli and municipal governments would welcome increased Palestinian turnout as long as it was not too high, and that Palestinian city councilors would likely be able to make progress toward improving day-to-day municipal services in Palestinian neighborhoods but would not be able to reverse such policies as home demolitions or residency permit revocations.

The East Jerusalem Palestinian team in both scenarios opted to run a technocratic party focused on economic and social issues rather than political or nationalist ones, despite pressure from the RAND moderators to adopt a more nationalist platform. In part, this might have been because of the perception among players that the network of the PA, PLO, and other Arab states was able to mobilize far better to block the vote than to support it. As a result, the East Jerusalem Palestinian team felt little reason to incorporate the nationalist platform demanded by Ramallah and other Arab and Muslim capitals. Furthermore, feeling abandoned by the Palestinian leadership and the broader Arab world, Palestinian Jerusalemites decided to take action in the way that seemed most likely to improve day-to-day conditions of their lives.

Our pilot game produced a range of findings, some of which were expected and others that were quite surprising. Running additional iterations of the game with different players in different settings would allow us to better understand which of our findings are robust to different combinations of players and which are opportunities and risks of concern to particular communities. For example, in the RAND-JIPR game, the majority of players were researchers with extensive experience viewing the city through an analytic lens.

As a result, we could be more confident in results that persist across games and be able to speak to the preferences of a wider range of stakeholders by observing divergent results. Similarly, running the game in different settings could elicit different information. As with any contentious policy matter, the forum of a game will shape who attends and the perspectives that participants are willing to articulate.

In this report, we explore the possible consequences of increased Palestinian participation in Jerusalem municipal elections. As we documented, the vast majority of Palestinians in Jerusalem have boycotted local elections for decades. In the 2013 election, 99 percent of Palestinians did not vote. However, several trends in Arab East Jerusalem suggest that the boycott might not last forever. Although it is unlikely to end any time soon, we sought to understand what might transpire if Palestinians went to the polls in significant numbers. Therefore, we worked with JIPR to conduct a seminar style game in Jerusalem with Israeli and Palestinian players to analyze decision-making under hypothetical new political circumstances.