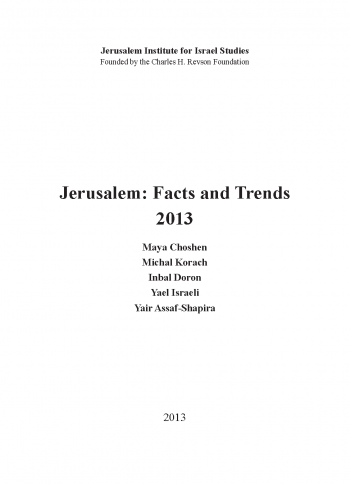 Jerusalem Facts and Trends is one of the Institute’s premier publications. It is an accessible guide through which anyone from a variety of fields can find useful information on Jerusalem. The publication analyzes the complex reality that is ‘modern Jerusalem’ and examines the area, the diverse populations that inhabit the city, sources of population growth, characteristics of the family unit, welfare and standard of living, employment, business and industry, education, housing and tourism. The data used in the publication is largely drawn from the Institute’s Statistical Yearbook of Jerusalem, published annually.

Standard of Living and Welfare

About a half (51%) of Jerusalem’s population, as noted, belongs to the low socioeconomic group. This constitutes a very high percentage of the population in comparison to Israel as a whole (23%) and to other large Israeli cities (2% in Haifa, Rishon Letzion and Petah Tikva, 1% in Tel Aviv and 20% in Ashdod). About one-quarter (25%) of the city’s population belongs to the upper-middle class. This percentage is low in comparison to other large cities and Israel in general. The percentage of the population belonging to the high socio-economic class (4%) in Jerusalem is also low in comparison to Israel (9%) and its major cities: 37% in Tel Aviv, 28% in Haifa and 10% in Petah Tikva. In Ashdod and Rishon Letzion, however there is not even one area that belongs to the high socioeconomic class.