Main Publications Jerusalem on the Map, Basic Facts and Trends (1967-1996) 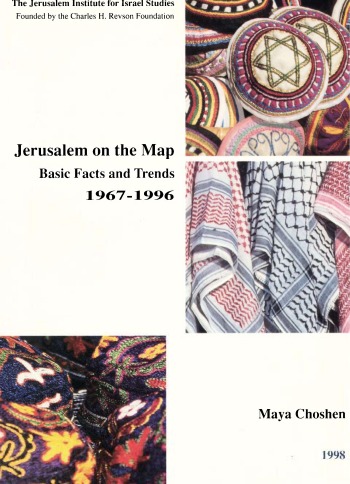 Jerusalem is today Israel’s largest city in area and in population – both of Jews and Arabs. Issues of population trends, planing and construction of the city, education, tourism, economic status, infrastracture and more are presented in this paper. The main origin of the data processed and presented in this publication is from the Statistical year book of Jerusalem , which is published annually by the Jerusalem Municipality and The Jerusalem Institute for Israel Studies, edited by Maya Choshen and Naama Shahar.

Jerusalem, the capital of Israel since the time of King David, became the ideal of all Jews in their enforced exile. Since the state’s establishment, the city has been the focus of national and international attention. The city became even more central on the global and local agenda in the wake of the 1967 war. Whereas before 1967 Jerusalem lay at the eastern extremity of the Jerusalem Corridor, bordering an enemy state, after the war the city found itself located at the center of an area containing numerous Jewish and Arab settlements.

The unification of Jerusalem in 1967 was a powerful spur to the city’s physical, demographic, and economic growth. The national policy of strengthening the capital city, which had been pursued since the state’s establishment, was reaffirmed, resulting in significant growth of the municipal area together with a building boom and a dramatic population increase. However, the development momentum of the late 1960s and the 1970s tapered off in the 1980s. In recent years the authorities have tried to reverse this trend by launching new initiatives in high-tech industry, higher education and by developing the infrastructure, building modern commercial centers, promoting tourism, and accelerating housing construction.

The peace process has again placed the city – resolution of the “Jerusalem question” will be a crucial element of the final-status talks – at the hub of the national and the international debate. A situation of peace giving rise to cooperation with the Arabs in the region could prove a tremendous boost to the city by exploiting the latent potential of interaction between the different population groups and between the city and the surrounding area.