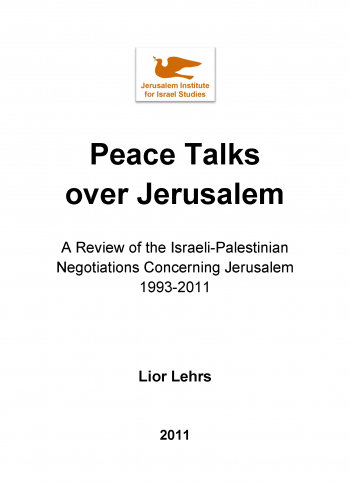 The issue of Jerusalem is at the heart of the Israeli-Palestinian conflict and of the national, religious, and political discourse on both sides. Its resolution is therefore crucial for the overall success of efforts to resolve the conflict. The Jerusalem Institute for Policy Research has been researching geopolitical issues relating to the city since 1993 . Its work seeks to help decision makers explore both the feasibility of reaching an agreement on Jerusalem and the various alternatives available to Israel in this respect, including their advantages and disadvantages. This study explores the negotiating processes that took place between Israel and the Palestinians regarding the question of Jerusalem since the time of the Oslo Accords (1993), with attention to the Camp David process (2000) and the Annapolis process (2008). Its author reviews and analyzes the main issues discussed by the parties, their various positions, the gaps between their positions, and the apparent areas of agreement. He also offers a number of general insights regarding the conduct and content of these negotiations.

The publication is divided into three parts: the first part presents a historical survey of negotiations over Jerusalem from the Oslo Accords (1993) to the second administration of Benjamin Netanyahu (2009-2013). Against this background, the second part outlines the points of agreement and disagreement reflected in the negotiating process as these relate to the fundamental issues that form the question of Jerusalem, indicating as well as the proposals and ideas that were offered in an effort to bridge the gap. The final part of the document addresses general questions related to the manner in which negotiations over Jerusalem were conducted.

The other findings include: on the issue of the Old City and Holy Basin: division of sovereignty on the basis of the “Clinton principle” or the solution of an international regime; on the issue of the Western Wall and Temple Mount/Al-Haram Al-Sharif: Israeli sovereignty over the Western Wall and a solution for Al-Haram AlSharif/the Temple Mount that will allow Palestinian control while addressing needs stemming from the Jewish affinity to the place and from security considerations; on the issue of “two capitals”: two municipalities in Jerusalem with a special mechanism for coordination and cooperation.

Barriers to Peace in the Israeli-Palestinian Conflict: Executive Summary