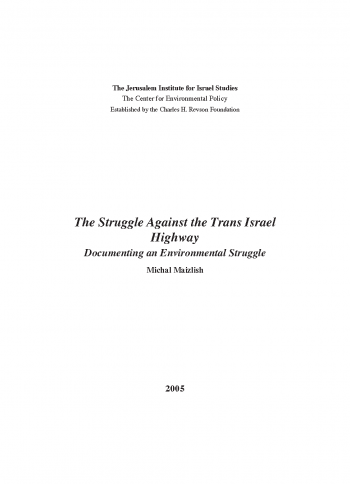 This study surveys in detail the moves taken in opposition to the Trans-Israel Highway project over the years 1993—2002. Many bodies, mostly environmental, took part in the resistance, which comprised direct actions in numerous fields – planning, professional, legal, public, political, and economic. The conclusions discussion presented in the papers can be used to outline several guidelines for future environmental campaigns.

Features of the Trans-Israel Highway project, as powerful economic forces massed behind the project, being a part of a national scheme and a government company specially established for advancing the project, had made the struggle against the project extremely difficult.

The struggle against the Trans-Israel Highway is unique among socialenvironmental struggles in Israel, in its complexity, scope, duration and character.

Missing from this struggle were an organized, long-term action plan; a coordinating body focused exclusively and continuously on opposition to the highway; effective collaboration among the various bodies opposing the highway; an organized knowledge base; and continuity of action.

Despite the struggle’s failure to halt construction of the central section of the Trans-Israel Highway, it did score some long-term achievements in: changing public opinion and influencing decision makers over the issue of investment in paving roads versus investment in public transportation; introducing innovative tools for the environmental movement’s activities in Israel; creating inter-organizational connections; creating a linkage between environmental and social issues; and placing the environmental issue on the public agenda.