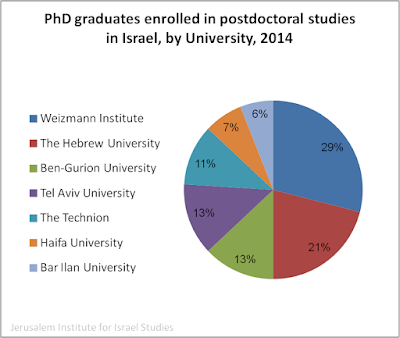 The term “postdoctoral” (or “postdoc”) refers to the period of study and independent research that follows the receipt of a doctoral degree (PhD) – an important stage in academic life. This period might last anywhere from one to several years. A 2010 survey by the Central Bureau of Statistics (“Career Survey of PhD graduates”) revealed that one-third (33%) of PhD graduates in Israel pursued postdoctoral studies. Among men with PhDs, 35% pursued postdoctoral studies, compared with 31% of women. The highest percentage of postdoctoral scholars were recorded in the physical sciences, mathematics, statistics, and computer science (33%), followed by the biological sciences (33%). A total of 11% of postdocs were in the social sciences and law, and 9% in the humanities.
The survey also indicates that nearly half of Israeli postdocs (48%) completed their postdoctoral studies in the United States, compared with 32% in Israel and about 3% in England. Almost half of the women postdocs completed their postdoctoral studies in Israel (48%), whereas among men the figure was only 23%. A review of postdoctoral studies by field of study reveals a significant difference between men and women. In the physical sciences, mathematics, statistics, and computer science most of the postdocs were men (75%), while in the humanities most were women (58%). In the social sciences and law the distribution was 60% men and 40% women.

In 2014 the Central Bureau of Statistics in cooperation with Israeli universities collected data regarding PhD graduates enrolled in postdoctoral studies in Israel during that year. A total of 58% were Israeli postdocs and 42% were foreign. The academic institute with the highest percentage of postdocs in 2014 was the Weizmann Institute (29%), followed by the Hebrew University (21%) and Ben-Gurion University (13%). Among Israelis half were men, while among foreigners 70% were men. These data reinforce what the 2010 survey found: women, more than men, tend to pursue postdoctoral studies in their home countries. Among postdocs in Israel, 42% were 35 years old or younger, and 51% were in the 36-45 age range. In 2014 the highest percentages of postdocs in Israel were in the biological sciences (27%) and physical sciences (26%), followed by mathematics, statistics, and computer science (9%), and engineering and architecture (9%).