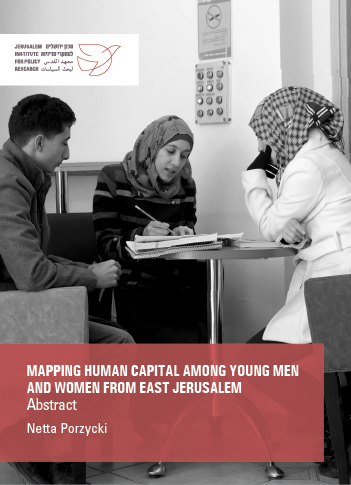 Recent years have seen numerous efforts to integrate East Jerusalem residents into the labor market generally and into quality employment specifically. At the same time, very little is actually known about the human capital in East Jerusalem. Data collection difficulties and various methodological problems have resulted in a lack of credible, comprehensive statistics about the Arab population of East Jerusalem, including its education and employment characteristics.

The study included a large targeted survey in East Jerusalem, with the participation of 1,500 men and women aged 18-35. To the best of our knowledge, this is the largest survey conducted in East Jerusalem to date. Consequently, its findings may provide new insights and a great deal of previously inaccessible knowledge. In addition, the study included two focus groups and a roundtable at which participants discussed issues that had emerged from the survey and potential solutions to them.

The State of Affairs and Main Insights

Characteristics of Education and Employment

The Link between Education and Employment

Barriers to Integration into the Labor Market

The study found a number of key barriers to the integration of young adults from East Jerusalem into the labor market:

The Integration of East Jerusalem Residents into the Israeli Employment Market: Learning from Success

Informal Education as a Means of Reducing Gaps in East Jerusalem