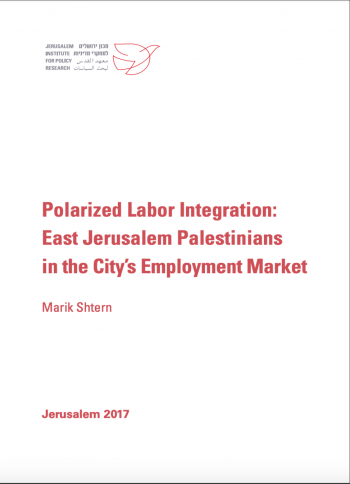 This paper examines the labor market for East Jerusalem Palestinians in the Israeli arena in the context of the urban space shared by the two parts of the city. Its aim is to provide a factual, statistical foundation to describe the labor market for East Jerusalem residents in its entirety, with attention to spatial distribution and to the characteristics of employed persons, including characterization of their work in East and West Jerusalem. The data will help us understand the extent of economic and employment interdependence between the two parts of the city, how this reciprocity shapes relations between the population groups, and its repercussions for the ethno-national character of Jerusalem for years to come.

A spatial analysis of the employment of Palestinian residents of Jerusalem across several phases during the period 1967-2015, with special attention to the past decade (2001-2015), offers significant new insights regarding the profile of Palestinians employed in the city and polarized yet reciprocal economic relations between the city’s two population groups – relations that have continuously been forming and falling apart over the years. Examining where each population group is concentrated in the city’s labor market reveals that the overall picture has not changed substantially over time. It has remained essentially stable for nearly five decades.

Positive changes along these lines require employee power relations that are not overtly and immutably biased in one direction, with Arabs filling all the lower-ranking positions and Jews holding managerial and supervisory positions. In terms of reciprocal relations between the two population groups, the key issue is the status of Jewish and Palestinian workers who share a workspace: Do they meet as administrator and cleaner, or as two physicians in a clinic? As noted, our comparison across various periods of time indicates that the former situation is still the more prevalent. Likewise, it is important to break the glass ceilings that prevent the promotion of Palestinians to managerial and higher-paid positions.