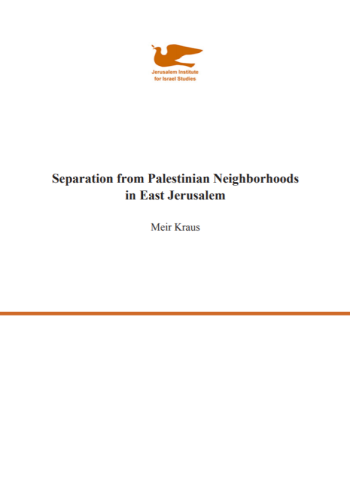 Separating Jerusalem: A Path to Peace?

The idea of unilateral Israeli separation in Jerusalem has recently received attention in the Israeli public discourse, though it is not entirely new. It has surfaced in light of the recent tensions and violence in Jerusalem as well as the difficulty of reaching any agreement between Israel and the Palestinian Authority in the current reality. Proponents of the idea argue that unilateral Israeli separation would contribute to Israel’s security in Jerusalem. In the absence of a peace process, it would also bring about political impact that may help to ensure a future two-state solution.

Importantly, unilateral Israeli separation does not mean separation entirely without coordination with the Palestinian Authority. Some degree of coordination is crucial to facilitating separation, especially in light of the lessons learned from Israel’s unilateral disengagement from Gaza.

This working paper first provides relevant background on Jerusalem and proceeds to analyze the meaning of separation. It then reviews the different aspects and implications of separation in the urban and geographic, human, legal, and security areas.