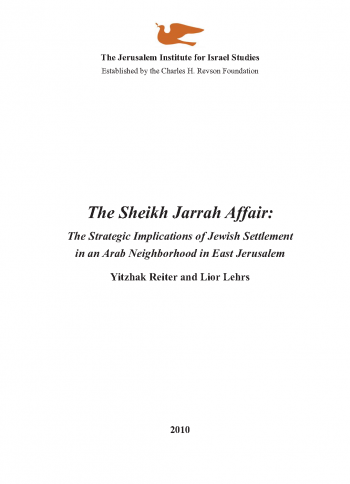 This paper aims to analyze the strategic implications of Jewish settlement in the heart of the Sheikh Jarrah neighborhood for the State of Israel’s vital interests. It also aims to examine the various tools available to the authorities in addressing this issue and in conveying to decision makers the need to formulate a policy of action that accords with the interests of the State of Israel. Sheikh Jarrah has historical significance with respect to the national and religious identity of both Palestinians and Jews, and this significance is being invoked in the current conflict between the two sides. Jewish settlement in Sheikh Jarrah is the work of private entities using legal procedures to reclaim their property rights. Through their actions, these entities are establishing facts on the ground that does not necessarily accord with the vital interests of the State of Israel. As such this complex reality cannot be left to the care and judgment of private entities.

This section will address the implications of Jewish settlement in Sheikh Jarrah and in the heart of other Arab neighborhoods in parts of East Jerusalem that are beyond the Green Line.  They are for the State of Israel’s strategic interests and for the goals of the government and the Jerusalem municipality with respect to the future, the prosperity, and the status of Jerusalem, as well as for international recognition of Israel’s status in Jerusalem.

We recommend that the government consider formulating a clear policy on the matter of settlement in the heart of Arab neighborhoods in East Jerusalem and that, in its approach to the issue, the government take into account the implications of the Jewish settlement in Sheikh Jarrah.  It would be for the vital interests of the State of Israel, as detailed in this paper, and would include considerations to the various courses of action.

This paper aims to assist decision makers in considering all the aspects of settlement in Sheikh Jarrah as they seek to formulate a policy on the issue.  It is inconceivable that these implications for Israel’s interests be actualized by private entities before the government has examined their consequences. The government should formulate a clear policy addressing the practice of Jewish settlements in the heart of Arab neighborhoods, taking into consideration the implications described in this paper. Despite the legal aspects of property rights and the court rulings on the matter, the government has the necessary tools to take action, should it opt to act.