The Temple Mount / Al-Aqsa: Heading Towards Loss of Control? 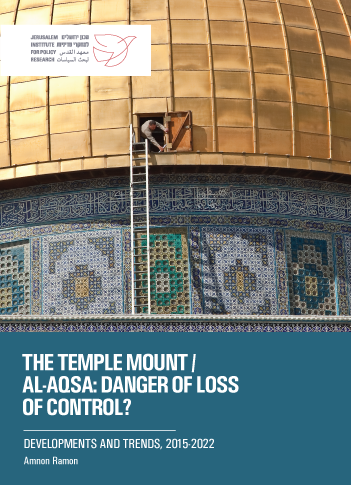 The Temple Mount / Al-Aqsa: Heading Towards Loss of Control?

This change reflects profound developments that are taking place among the Jewish public, particularly the national-religious public, regarding the place of the Temple Mount in religious consciousness and practice, and it starkly contravenes the position of the Chief Rabbinate and important Haredi (ultra-orthodox) adjudicators, who prohibit religious visits by Jews to the Temple Mount.

Concurrently, there have also been changes on the Muslim side: The influence of the Jordanian establishment, Palestinian Authority representatives, and Waqf leaders over what happens at the Temple Mount/Al-Aqsa is declining, while the strength of East Jerusalemites and local “bottom-up” activists is increasing.

This study, conducted in partnership with the Friedrich Naumann Foundation for Freedom, surveys the developments and trends that took place at the Temple Mount during 2015-2022, examines the factors that led to erosion of the status quo regarding Jewish prayer at the Temple Mount, and considers the repercussions of these changes for various actors in Israel, the Palestinian arena, the Muslim world, and the international arena.

The study focuses primarily on changes that have taken place on the Israeli-Jewish side since 1967, yet without overlooking developments on the Palestinian and Jordanian side, given that the two stories are intertwined and reciprocally influential.

Christianity & Christians in the Jewish State