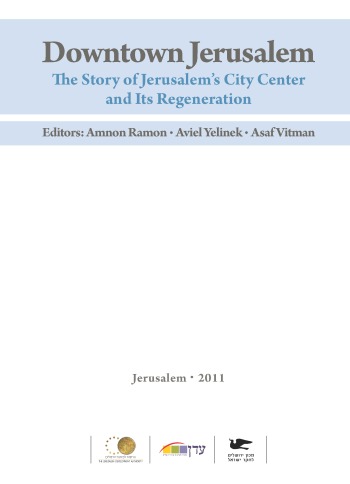 This is an abstract of a book that tells the fascinating story of Jerusalem’s city center from the 19th century to present. The development of the center is recounted in great detail since its establishment outside of the city walls during the Ottoman era, its consolidation as the modern city center during the mandate, the process of its fading importance in the 80’s and the aspiring projects for its renewal, focusing on turning Jaffa street into the main pedestrian mall and on the tracks for the first light rail in Israel.

Jerusalem has been on the wane for a generation. This can be attributed to a variety of cause-and-effect perspectives: a declining socioeconomic status, negative migration, and the downbeat image of the city held by substantial sectors of Israeli society.

Jerusalem’s troubled state can be seen with particular clarity in the decay that has come to characterize the city center. Residents have abandoned downtown Jerusalem and the inner city for new satellite towns and neighborhoods that have burgeoned since the Six Day War. Major offices and even public institutions have relocated from the city center as well: government ministries have moved to the government campus at Givat Ram, or to Sheikh Jarrah and Givat Shaul; competing commercial hubs have developed in Talpiot, Givat Shaul and Malha, while cultural and recreational institutions were established primarily to the southern part of the city.

The city center renewal plan described in this book is an ambitious endeavor that represents a major financial investment on the part of the Israeli government and the Jerusalem Municipality. The plan constitutes an attempt Downtown Jerusalem The Story of Jerusalem’s City Center and Its Regeneration VI – unprecedented in Israel – to approach Jerusalem’s renewal and revitalization in a logical and considered manner − despite a prevailing sense that the city is a “lost cause.”

Behind the plan is the premise that downtown Jerusalem is the city’s “beating heart,” and that proper functioning of this heart is essential if the city as a whole is to thrive. Policymakers and planners look to city center rehabilitation as a key means of halting Jerusalem’s decline, stimulating its economy, and improving its image in the eyes of its residents and of the Israeli public at large.