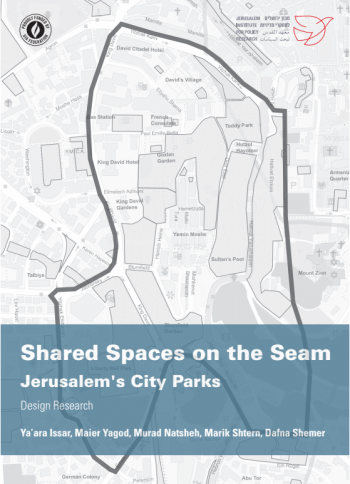 The planning project ‘Shared Spaces on the Seam – Jerusalem’s City Parks’, is the result of the work of a planners research group. The group explored a space in Jerusalem which encompasses areas that are, or could be, meeting places between the city’s various – and for the most part separated – populations. This design and planning project presupposes that the improvement of a physical environment can bring people together and create positive encounters between individuals from different backgrounds.

Jerusalem has a long and complex history of conflict and de facto divisions among its population. Its neighborhoods are for the most part sectarian, each encompassing a majority of residents characterized by a specific demographic of religious, national, or cultural affiliation, with each group perceiving the city as its own. Shared Spaces on the Seam seeks to strengthen the existing connectivity within the space and proposes new or improved congruence where it is lacking. A city is a work in progress, not a static object. The authors of this paper believe that each city is a unique entity with dynamic attributes which can transform the life of its residents and visitors. Shared Spaces on the Seam explores the vast potential within a specific swath of land in the heart of Jerusalem to enhance the city’s civic life for all who set foot there.

This paper examines the discontinuous strip of parks which currently extends along the unmarked seamline between West and East Jerusalem in order to think about the possibilities of further design and improvement of the area. The aim is to transform it into a space that could enable more positive and direct encounters among Jerusalem’s diverse populations. The project’s focus is on a space which is diverse and ‘mixed’ from an urban perspective, and which is located in the center of a city divided into areas with different demographic characteristics.

The space in question is a green strip, extending the length of the seamline from south-west of the Old City. The character of this large space, spread over 577 hectares, changes between each subdivision of the site. South of the space comprising the study is The First Station, a tourist-consumer spot, where the ‘Train Track’ Park begins. The Mamilla shopping boulevard stretches to the north, to the east stand the walls of the Old City and to the west is the string of hotels in central Jerusalem and the Talbiya neighborhood.

This document presents an analysis of the space, details its existing features, and highlights its inherent planning problems and challenges. It aims to present a series of planning and design recommendations which capitalize on the existing aspects of the areas within it and contend with its challenges.

The goal is to create an urban space of unique significance, which will bring together different populations and function better as a positive meeting place. While there may be opposition to some of the recommendations, our intent is to spark fresh thinking with respect to the design and planning of urban space in Jerusalem so as to create positive shared spaces for the benefit of the city’s residents and visitors.