Main Publications A Transportation and Environmentally-Sensitive Approach to the Classification of Urban Activities: Manager’s Brief 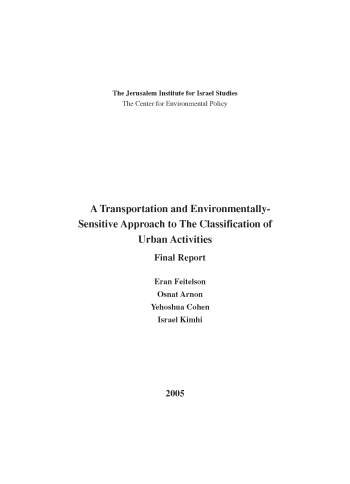 Mixed land use has many potential advantages but also expose urban populations to environmental degradation, which may deteriorate as densities increase. The main dilemma presently facing urban planners is how to encourage a mixture of activities and offer businesses maximum flexibility in finding their optimum locations, while at the same time ensuring good access without jeopardizing environmental quality. This report presents a new method for classifying urban activities, based on transportation and environmental considerations, so as to allow mixed uses, ensuring good access to all activity types without generating unacceptable environmental degradation.

During the 1990’s, the emphasis in planning policy in Israel gradually shifted from the spreading out of building around existing cities and establishing new residential communities, to increasing densities within the existing urban fabric. This change intended to protect natural open space and was reflected in a series of national and regional plans, including the national master plan NOP 31; revisions to the district outline plans for the Central, Tel Aviv, Jerusalem, Haifa and Northern districts; the Tel Aviv Metropolitan Area master plan; the master plan for Israel in the 21st century — Israel 2020; and the national master plan NOP 35. Policies for increased density have been difficult to implement.

At the same time, there is greater recognition of the importance of cities, particularly large cities, as an engine for Israel’s economy, and the problematic aspects of transportation systems that are vital to allow these cities to function. This recognition is the basis of the principal dilemma facing planners in Israel. On the one hand, they want to encourage and maintain urban revitalization, which is a basis for economic growth. But on the other hand there is also a desire to preserve the urban quality of life, which would make the city an attractive place to live.

Maintaining urban quality of life is essential for retaining strong populations in cities, especially in their internal core, and to reducing suburbanization and the resulting loss of open spaces, and to preventing the deterioration of older built-up urban fabrics. However, maintaining the urban quality of life requires imposing restrictions on the rate and nature of changes in activities that are the heart and soul of urban revitalization. In other words, while we need to maintain the relative advantages and vitality of the cities and promoting maximum flexibility in the process of changing the system of urban activities, we need to preserve the urban quality of life — essential for halting suburbanization and the deterioration of the urban fabric — which requires imposing restrictions on the nature of the changes to the system of activities in the city.