Main Publications Culture as a Tool for Urban Regeneration 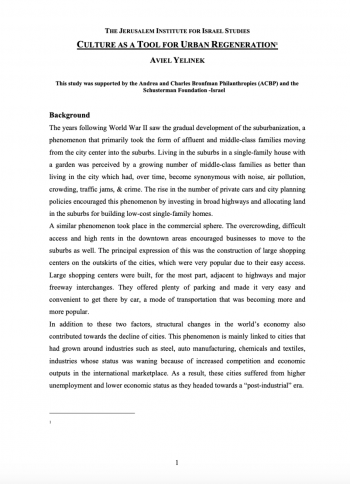 The years following WWII saw the gradual development of the suburbanization. The suburbs were perceived as better for living than the city which had, over time, become synonymous with noise, air pollution, crowding, traffic jams, & crime. A similar phenomenon took place in the commercial sphere. The overcrowding, difficult access and high rents in the downtown areas encouraged businesses to move to the suburbs as well. In addition, structural changes in the world’s economy also contributed towards the decline of cities. Taking this new reality into consideration, many cities were forced to compete with one another in an effort to display their cultural, human, or physical uniqueness so as to emphasize its advantages over other cities. This competition is reflected in their attempt to attract high-tech industries, to invite investment from the private sector, and to become a center of tourism and cultural attraction. Increased competition led many cities to advance processes of urban regeneration aimed at highlighting their uniqueness and differentiating them from other cities. Culture plays a key role in these processes, and is the key element talked about in this document.

In recent years, the relationship between culture and urban regeneration has become clearer. Culture is becoming a significant factor in attracting economic and human capital, increasing the number of visitors to the city and boosting commercial and economic activity. Cultural events serve to promote the cities’ image and turn them into lively and vibrant places. Culture serves as a drawing point for tourists, makes them stay longer on each visit, and therefore spend more money. Cultural events may also contribute to positively branding the city on the national and international levels. In addition, culture is perceived as advancing the city’s competitive potential versus other cities; it increases its drawing power, and thereby serves as a catalyst for urban economic growth.

From a physical standpoint, culture is a factor in the revival of older districts and urban regeneration. Cultural institutions and various cultural districts generate activity in their environment and contribute to increased traffic and the physical restoration of the surrounding environment. Cultural activities are not limited to specific hours, and therefore they can contribute to attracting different people at different times, thereby generating economic and human activity in the evening and night hours as well (“nighttime economy”). From a social standpoint, culture is perceived as a factor that contributes to the inclusion of various sectors of society and gives expression to its diversity.

This role is of great importance in easing ethnic, class and racial tensions, particularly in diverse or complex societies. In addition, culture plays an important role in investing public space with content and creating vibrant and vital urban areas. In this way, and in combination with the built-up environment, culture can contribute to creating a “sense of place.” Cultural projects serve, in this context, as important symbols that give meaning to the built-up environment and play an important role in urban regeneration. In combination with urban design, culture can contribute to differentiating the city, giving character to the region and raising the inhabitants’ sense of pride. Culture is a central component in the urban space, because it contributes to consolidating the city’s identity and thereby to creating a “healthy” urban expanse.