Many Israelis take time during the Tishrei Holiday season to vacation in Israel and abroad. The long lines at the passport renewal offices at the Ministry of Interior and at the passport control counters at Ben Gurion Airport give rise to a general feeling that many spend the holidays vacationing overseas. In truth, however, there are many more who spend their holidays in Israel. Data from the 2008 Social Survey conducted by the Israel CBS indicate that some 51% of Israelis (ages 20 and over) vacationed overnight in Israel (during the 12 months that preceded the interview) compared with 31% of Israelis who vacationed abroad.

CBS Social Survey data indicate a correlation between the degree of religious observance and the likelihood of vacationing in Israel: in 2008, 58% of secular Jewish Israelis had vacationed in Israel during the preceding year as compared with 55% of National- Religious Israelis and 46% of Ultra-Orthodox Israelis.

A comparison across Israel’s central cities reveals that 48% of
Jerusalem’s residents vacationed in Israel in 2008 compared to 55% of Tel Aviv residents, 53% of Rishon Lezion residents, 52% of Ashdod residents and 47% of Haifa residents. 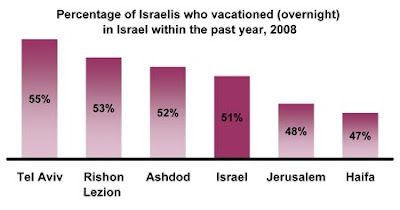