Main Blog Be fruitful and multiply

A new study correlating fertility in Israel with the level of women’s religiosity, published in June of this year by Dr. Ahmad Hleihel of the Central Bureau of Statistics, states “In recent years there has been an increase in Israeli public discourse regarding the differences in fertility levels among women from the different groups that make up the mosaic of Israeli society. This discourse focuses on the future composition of Israeli society and, in particular, the composition of the work-age population. There are three principal reasons for this: fear of change to the future political composition of society, the socio-political character of the state of Israel, and the low rates of participation of two communities – Haredi and Arab – in the workforce and their significant influence on poverty in Israel.” Jerusalem, where a discourse on this issue has flourished for decades already, has preceded Israel. 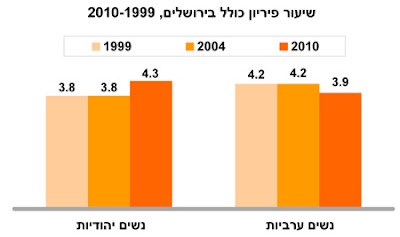