Between Tel Aviv and Jerusalem – Galleries for Contemporary Art

Between Tel Aviv and Jerusalem – Galleries for Contemporary Art

While a large number of museums receive support from the Ministry of Culture, there are also many private galleries that constitute an inseparable part of the world of contemporary art in Israel. These galleries form a variegated infrastructure for cultural activity in Jerusalem and Tel Aviv. 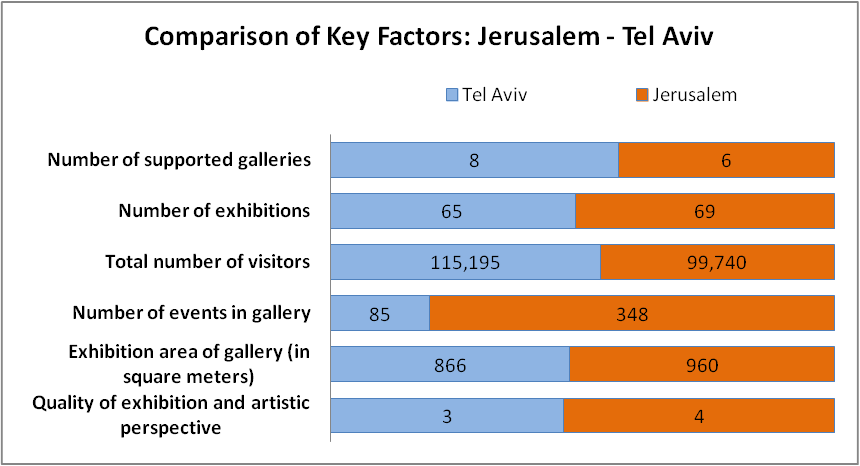 Every two years the Pilat Center for Culture Research and Information publishes data about activities, funding, and numbers of visits to the museums and galleries supported by the Ministry of Culture. In 2010 the Ministry supported 41 art galleries throughout the country. About one-third of these are located in Jerusalem and Tel Aviv. In Tel Aviv 8 galleries receive support (20%), compared to 6 (15%) galleries in Jerusalem.
The Pilat data reveal that as of 2010 Tel Aviv had the larger number of galleries receiving support (8 as compared to 6) and more visitors (about 115,000 as compared to 100,000). Yet Jerusalem had more space devoted to exhibits (960 square meters as compared to 866 square meters) and a larger number of exhibitions (69 as compared to 65), as well as higher quality exhibitions and a more developed perspective on art (rating 3.6 as compared to 3.1 out of 4) – based on the innovation of the exhibit and the curatorial perceptions as determined by the Committee on Quality within the Department of Plastic Arts in the Ministry of Culture. The most significant difference is in the number of events that took place in the various galleries, which stems from increased activity in the printmaking sector in the context of the Jerusalem Print Workshop (187 events).
While a large number of museums receive support from the Ministry of Culture, there are also many private galleries that constitute an inseparable part of the world of contemporary art in Israel. These galleries form a variegated infrastructure for cultural activity in Jerusalem and Tel Aviv. Most of these galleries are situated in Tel Aviv.
On the occasion of Tel Aviv’s Year of Art (2012) the “Global City” initiative of the Tel Aviv Municipality compiled a list of 110 exhibition spaces in the city. To date, no such list has been produced in Jerusalem. In order to form a clear picture of the number of galleries engaged in contemporary art in Tel Aviv and Jerusalem, one may examine exhibition season openings during 2013 in both cities. The Jerusalem event “Manofim” (“Cranes” – in the sense of construction) was spread out over 22 contemporary art galleries, a majority of the city’s galleries that focus on this type of art. The event “Ohavim Omanut” (“Love Art”), which took place simultaneously in Tel Aviv, had 38 participating galleries. Thirty other galleries, including some of the city’s main galleries, opted to boycott the event in the context of their struggle for the reduction of municipal taxes on galleries.
Although government investments in galleries in Tel Aviv and in Jerusalem appear to be comparable, Tel Aviv actually has a broader and more varied infrastructure for exhibitions and discourse in the area of contemporary art. This infrastructure is distributed across a space created by independent galleries, most of which are supported by external investors, art collectors, and creative art groups. The number of galleries and exhibition spaces in Jerusalem – where nine art schools of various types exist, more than in any other Israeli city – constitute about only one-fifth of the number of galleries in Tel Aviv.