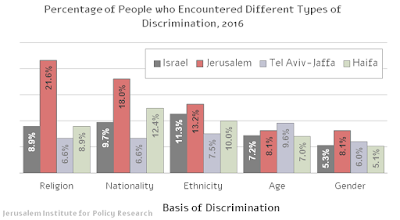 In a diverse society such as Israel’s, we would expect that occasionally there would be friction between different people on the basis of the social variations between the groups to which they belong. We often see that people are discriminated against negatively or positively because they belong to a particular gender or to a particular ethnic or religious group. An examination of the results of the 2016 Social Survey conducted by the Central Bureau of Statistics, reveals that there were more people in the city of Jerusalem who responded that they encountered high levels of discrimination in almost all of the categories (types of discrimination) examined, than there were in Tel Aviv-Jaffa, Haifa, and the general population.

Close to 22% of respondents who live in Jerusalem said that they have encountered discrimination based on the religious group to which they belong, as opposed to about 9% in Haifa and in the general population, and about 7% in Tel Aviv. There were also a much larger percentage of respondents from Jerusalem (18%) who said that they had experienced discrimination based on nationality, as opposed to Haifa (12%), the general population in Israel (10%), and Tel Aviv-Jaffa (7%).