The most prominent entertainment area is still the Egoz Street at the corner of the Tut Street, where the number of entertainment venues has also grown. On Etz Haim Street (the covered market) and especially on its corners with other streets, many places of entertainment were also opened. 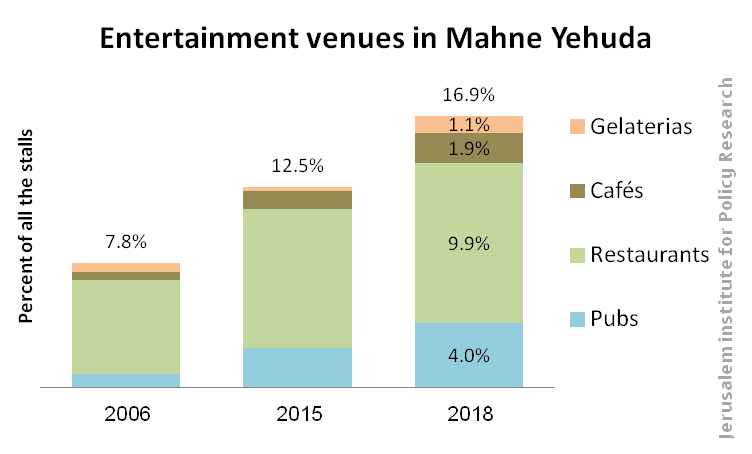 The Mahne Yehuda market is undergoing a process of change in recent years. Visiting the market one notices changes, but in the havoc of Friday shopping, or the leisure of beer in the evening, you can not really say whether your gut feeling is right. We returned to Mahne Yehuda after three years, to update the business picture in the market , in order to quantify changes, confirm (or refute) our gut feeling, and – shop.

Two areas that remain almost unchanged are the “Georgian Market” and the “Iraqi Market”. In both of them there are mainly vegetable and fruit stalls, and both include one entertainment business. Mahne Yehuda Street (the “open market”) is also characterized by many fruit and vegetables stalls, with a few entertainment venues, including two chain restaurants at its edge, near Agrippas Street.

The mix of businesses in the covered market attests to a change that is concentrated there, but not limited to it. Many of the entertainment businesses did locate in the covered market – Etz Haim Street and the alleyways stemming from it. The roofing, whichave it its name, may seem touristy and can be enjoyed in the winter, but the reason for the increase in the entertainment business there may be simpler and relate to the ownership structure of the shops. Another possibility is that this trend has not yet exhausted the geographical space of the covered market, and will continue to spread to the rest of the Mahne Yehuda.