< Previous Post What do you want to be when you grow up?
Next Post > How Much Do Jerusalem Residents Pay to Live near the City Center?

Will the proposed law, intended for fair rent, change the balance between real estate rent and sell markets? 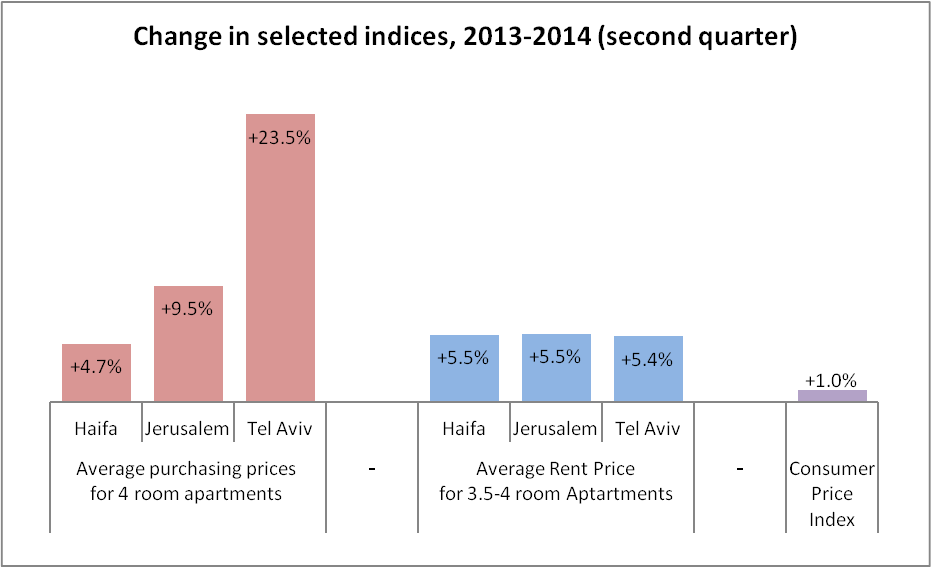 On November 24, the memorandum of the law for fair rent was published. The law states that the rent paid for an apartment will not increase by more than 2% per year, for three years. How different is the proposed situation from the prevailing one?
The average monthly rent paid for a 3.5 to 4 room apartment in Jerusalem stood at NIS 4,480 in the second quarter of 2014. This amount was much lower than the average paid in Tel Aviv (NIS 6,420), and much higher than the average paid in Haifa (NIS 3,010). The rent for these apartments in Jerusalem saw an average rise of 5.5% in the last year (since the second quarter of 2013 – during a period of four quarters), similar to Haifa (5.5%) and Tel Aviv (5.4%).
Compared to the proposed maximum stated in the law (2% annually), the rise seems to be steep. Compared to the cost of living, measured in the consumer price index, it is even more extreme, since the index rose only by 1% during the period. That means that the average rent rose by more than twice the proposed maximum, and more than five times the rise in the other components of the consumer price index.
Rent prices of smaller apartments in Jerusalem rose by lower percentages (1.3% rise and 4.3% rise in 1.5-2 room and 2.5-3 room apartments, respectively). Rent for larger apartments, sized 4.5-5 rooms, rose more dramatically, by 6.1%.
Will the proposed law change the balance between real estate rent and sell markets? Average purchasing prices for 4 room apartments in Jerusalem stood in the second quarter of 2014 at NIS 1,925,000. These prices rose during the previous year (from the second quarter of 2013) by 9.5% – a very steep rise. Will the prices’ change rates be affected by the new law? Only time will tell.
Data sources: Ministry of Construction and Housing – Division of Economic Analysis: Data Tables

< Previous Post What do you want to be when you grow up?
Next Post > How Much Do Jerusalem Residents Pay to Live near the City Center?

Thanks you for nice information. If you want usa roommates service you try this, Roommatefinder site Provides one of the best Rent services for living places in the US.