Almost half of the households in Israel are small units, consisting of one or two persons. Household size distribution is a key factor not only in calculating the needed services, but also in planning the supply for small or large apartments.

There are 2.67 million households living in Israel, according to data published recently by the Central Bureau of Statistics. A household is a person, or a number of people who live in the same apartment and share the budget for food expenses. Of households in Israel, almost half (45%) are small units, consisting of one or two persons. Among Jewish households, the percentage of small households is slightly higher, at 49%, and among Arab households, it stands at 20%. Household size distribution is a key factor not only in calculating the needed services, but also in planning the supply for small or large apartments.

The percentage of these smaller households is rising, and about 20 years ago (in 1998), their rate stood at 43% among Jews, and at 18% among Arabs. The rise in the rate of small households is due to the postponement in the age of marriage and in the birth of the children, as well as an increase in life expectancy. Both of these processes prolong the time that people live alone or with a spouse without children, thus increasing the proportion of these households in the population.

Among the Arab population in Israel, the number of children per woman, or per household, has been declining over the past decades. A delay in the birth of the first child is not a dominant process among the Arab population, and especially not among Muslim women. Accordingly, the reduction in the proportion of small households is relatively small, while there has been a sharp decline in the number of large households.

The proportion of large households, consisting of six persons or more, is 12% of households in Israel, 9.2% of Jewish households, and 27% of Arabs. Although the rate among the Arab population is three times greater than in the Jewish population, in 1998 the rates were 37% among Arabs, and 9.5% among Jews (13% among all households), a gap of almost four times, which decreased significantly in the past 22 years. 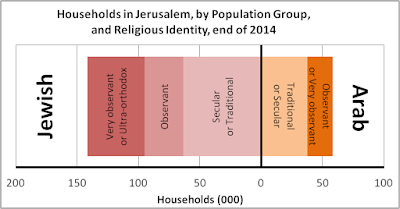 Households and Religiosity
By: Yair Assaf-Shapira
Household data reveals religious affiliation in Jerusalem among its population.  When trying to estimate demand for housing as well as for other services, HH (household) data is sometimes more importa... 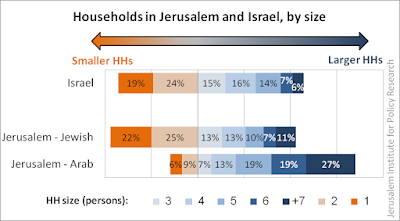 Households
By: Yair Assaf-Shapira
How are households defined?  What is the future for the institution of homes?   At the end of 2016, some 2.5 million households were established in Israel. ...