Main Blog How Do Jerusalemites Spend Their Leisure Time?

When surveyed about how they spend their leisure time, the participants in Jerusalem ranked lowest in going to the movies and reading books in comparison to other major cities in Israel. Part of the reason for the significant statistical disparity between cities is the composition of Jerusalem’s population. For example, only 9% of the ultra-orthodox community reported to attending cultural events in the city. 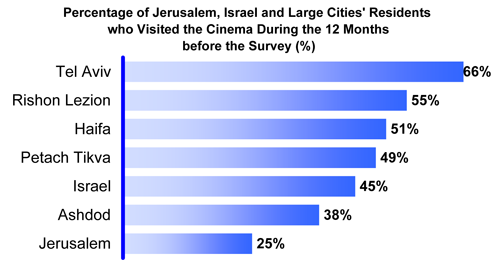 This year the annual social survey published by the Central Bureau of Statistics included questions that address the culture of recreation among Israel’s residents. Survey participants were asked whether they had attended theater plays, entertainment shows, or children’s plays during the past year, among other questions. The data reveal that only 28% of Jerusalem’s residents attended one of the types of shows listed above during the past year. This figure is much lower than the percentage among residents of Tel Aviv-Jaffa (63%), Rishon LeZion and Petach Tikva (59%), and Haifa (52%).

The low rate of attendance is a function of the composition of the city’s population. For example, within the Jewish sector, only 9% of Jerusalemites who define themselves as ultra-orthodox (haredi) attended cultural events of the sort listed above, as compared to 46% of religious residents and 68% of secular residents. Rates of attendance differ between Jerusalem’s Jewish and Arab residents as well. Among Jews the rate of attendance was 38%, whereas among Arabs it was only 7%.

And what about book reading? A total of 63% of Jerusalemites said that they had read books during their leisure time over the previous year, lower than the figure for Petach Tikva (64%), Rishon LeZion (65%), Haifa (67%), or Tel Aviv-Jaffa (72%). The extent of religious observance among Jews does not especially influence the percentage of book readers, which is similar across the various groups. In contrast, there is a significant difference between Jerusalem’s Jews and Arabs on this question: the percentage of Jews who had read books during the previous year was 72%, higher than the figure for Arabs, which was 43%.

Source: Analysis of data from the Central Bureau of Statistics’ 2011 social survey