It is interesting to compare the Jewish and Arab sectors in terms of employment rates in Jerusalem across various areas of employment for men and women. 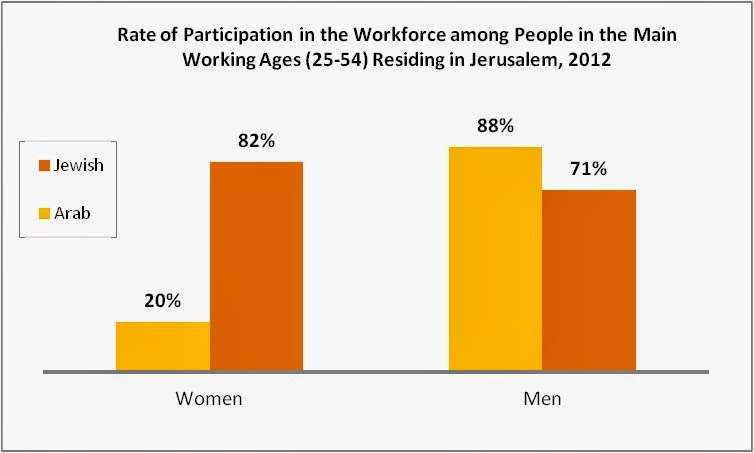 The city of Jerusalem, one of the major focal points of employment in Israel, serves as an economic nerve center for more than 1,200,000 individuals. The issue of employment in the city is at the heart of the discourse about the future of Jerusalem in general and about its potential to attract a creative populace in particular.
In 2012 a total of 294,000 individuals were employed in Jerusalem, constituting 9% of the total in Israel. Among the total number of employees in Jerusalem, about 75% were residents of the city, 11% were residents of Judea and Samaria, and 6% were residents of the Jerusalem District. Thus, a total of 92% of employees in Jerusalem were residents of the city and its environs. Approximately 2,400 of those employed in Jerusalem were residents of Tel Aviv, constituting about 1% of the total.
The data indicate that most Jerusalem residents (87%) prefer to work within the city, while 13% work outside the city, with women tending to work closer to home than men. Only 8% of the employed women who are residents of Jerusalem work outside the city, compared with 17% of men. More employees residing in Tel Aviv and Haifa choose to work outside their city than do employed residents of Jerusalem. In 2012 the percentage of Tel Aviv residents working outside the city was 37% (for women the figure was 30%), and in Haifa the percentage of residents working outside the city was 29% (for women the figure was 21%).
Men and women also differ in terms of areas of employment. Among women, who constituted 47% of all employees in Jerusalem during 2012, the main areas of employment were the following: education (24%), health, welfare, and nursing (including homecare) services (20%), and public administration (12%). In contrast, among Jerusalem’s employed men the main occupations were in the areas of trade (15%), business services (15%), and education (11%). In 2012 a total of 16,000 individuals were employed in the high-tech industry in Jerusalem, constituting 6% of all employees in the city as well as 6% of all high-tech employees in Israel. Of these, 64% were men.
It is interesting to compare the Jewish and Arab sectors in terms of employment rates in Jerusalem across various areas of employment for men and women. Among women in both sectors, the data indicate that women primarily work in similar areas: education and health, welfare, and nursing (including homecare) services. In contrast, for Jewish men the main areas of employment are business services, public administration, and education, whereas in the Arab sector men are primarily employed in the areas of trade, construction, hospitality and food services, transportation, and communications.
The most significant difference between the sectors in terms of employment in Jerusalem is the rate of participation in the workforce. Within the dominant age groups of employees (25-54), Arab men have a higher rate of participation in the workforce than Jewish men (88% compared with 71%). Among women the situation is reversed, with a particularly low rate of workforce participation among Arab women – only 20% in 2012 – compared with 82% among Jewish women. The rate of workforce participation of the Jewish sector in Jerusalem is unusual in that the women’s rate of participation is higher than that of the men (82% compared with 71%), primarily because of low workforce participation among ultra-orthodox men.

These statistics are fairly specific and detailed for us the most common sight as well as the shape of the latter. friv 3