Let There Be Light

Main Blog Let There Be Light

Let There Be Light

Increased electricity consumption corresponds to wealth, not population size. Greater trends can signify a higher standard of living in Israel, but a comprehensive review must also recognize the substantial air pollution that is created by electricity production. 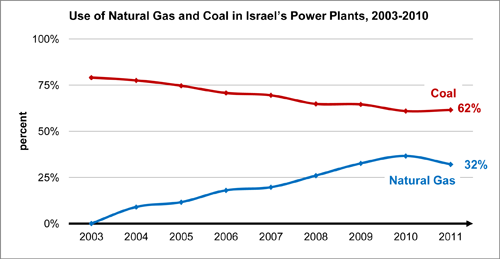 All of us consume large amounts of electricity, and it is hard for us to imagine life without it. Electricity consumption is one of the indicators of a country’s level of development: as the years pass and we become more modernized and developed, we also consume more electricity. One might expect that increased electricity consumption would correspond with an increase in population size, but this is not in fact the case. In 1967 the average per capita consumption of electricity in Israel was 1,429 kilowatt-hours (kWh); in 2000 it reached 5,559 kWh, and in 2011 – 6,232 kWh. Wealth also plays a part in our consumption of electricity: the richer we are, the more electricity we use. On average, the top tenth percentile consumes more than 10 times the amount of electricity that the bottom percentile consumes (1,679 kWh versus 133.9 kWh).
Does electricity consumption also vary by location within Israel? During 2011, those of us in Jerusalem consumed 4.9976 billion kWh, an increase of 5.4% over the previous year. Israel as a whole also recorded an increase in consumption (2.1%), although Tel Aviv actually recorded a decrease of 1.3% between the years 2010 and 2011. If we examine only household consumption, we find that the average amount of household electricity consumption per consumer during 2011 is relatively comparable for Jerusalem (6,398 kWh), Tel Aviv (6,304 kWh), Haifa (6,184 kWh), and Be’er Sheva (6,296 kWh), and each of these figures is below the national average, yet consumption has still increased relative to previous years. Compared to other countries around the world, overall per capita electricity consumption in Israel in 2009 was nearly identical to that of Germany, the Netherlands, and Demark, whereas it was much higher than the figure for Turkey or Romania and much lower than the figure for Norway or Finland.
So where do we go from here? We can view increased electricity consumption as evidence of a higher standard of living and therefore as a positive trend, but we must not forget that electricity production entails substantial air pollution. On average, Israel’s power plants are responsible for about 50% of the total amount of air pollution emissions. Natural gas, which provides an alternative source of energy production, is less polluting but its use is not sufficiently widespread in Israel. In 2011, only 32% of the electricity produced in Israel came from gas, while about 62% was still produced using coal. Nonetheless, this is a significant improvement over past years, and the percentage of electricity produced by gas is only increasing (in 2003 it was 0%!). Government reforms are also likely to help reduce consumption and pollution in the coming years.
Perhaps through progress and technological improvements we will succeed not only in increasing our electricity consumption but also in reducing it through innovation and efficient use on all our parts.