Mobile phones are increasing in popularity and usage.  In 2014, 91% of Israeli households had at least one mobile phone, with big cities displaying greater trends.  The three major cellular companies had similar antennae infrastructures. 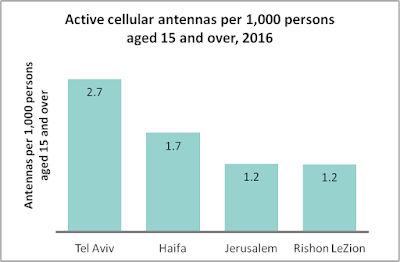 Lately, with the increased use of smart phones, the cellular device is playing a growing part in our lives. Our dependency on cell phones has sky rocketed, with its diversity of uses. Hananel Rosenberg, from the Institute for the Study of New Media, Politics and Society at Ariel University, mentions some of them, including news, entertainment, games, calendar, documents, transit times, navigation, social networks, and of course – talking.

Ownership rate of cell phones in Israel is high by any standard. According to the Statistical Yearbook of Jerusalem 2016 (table VI/4), 91% of households in Israel had at least one mobile phone in 2014. The data for the large cities are slightly higher with 93%, 96% and 98% in Jerusalem, Haifa and Tel Aviv, respectively. Data do not exist specifically regarding smart phones, but estimations of ownership rate vary between 64% and 72%.

One situation that some of us may recall, perhaps from army service, is the search for an area with good cellular reception. Lack of reception is common in far away areas, but it might also be encountered in a central area, and even in the middle of town. The common desire for good cellular coverage comes with ambivalence, as the radiation from antennas and devices is a major health concern, mainly with children.
According to the Ministry for Environmental Protection, as of January 2016, active broadcasting cellular antennas in Israel numbered 8,696. Among the large cities, Tel Aviv had the widest coverage, supplied by 939 antennas. Jerusalem, with a much larger land area, had 673; Haifa had 391; and Rishon LeZion had 228. It may be assumed that the concentration of businesses and economic strength of Tel Aviv led to the good cellular coverage.
The break down according to cellular companies, or carriers, reveals that the three major companies—Partner, Pelephone, and Cellcom—had similar shares of the antennas infrastructure: 29%, 28%, and 27%, respectively. Hot Mobile held 15% of the antennas, and Golan Telecom had one percent, almost only in Tel Aviv.