The moshav is a type of collective village unique to Israel. It operates as an economic cooperative, in which each member family owns a plot of land, primarily intended for agricultural purposes. Today, moshav residents include people who are not members of the cooperative. There are two types of moshav – the collective smallholder’s settlementd the workers cooperative settlement; most moshavim are of the latter type. The first moshav, Nahalal, was established in northern Yizre’el Valley in 1921. The second moshav, Kfar Yecheszkel, was also established in the Yizre’el Valley.

At the close of 2008, there were 440 moshavim of both kinds in Israel, which were home to 258.1 thousand people – approximately 4% of Israel’s population. The population of moshavim in Israel has increased over the past decades from 130.0 thousand people in 1972 to 168.5 thousand in 1991 to 258.1 thousand in 2008. Over the past twenty years, moshavim have undergone extensive demographic and other changes that were largely instigated by an overhaul in government policy that allowed formerly agricultural lands to be used for other residential, commercial and industrial uses.

The data for 2008 shows that 33% of moshavim were located in central Israel, 27% in northern Israel, 25% in southern Israel and 9% in the District of Jerusalem. While the geographic spread of moshavim throughout the country is impressive, it is nevertheless true that the average number of residents in moshavim in central Israel is approximately 800 compared with 500 in the South and the North, and 300 in Judea and Samaria. Three moshavim, Orah, Aminadav and Beit Zayit, border the municipal borders of Jerusalem. The Matte Yehuda Regional Council, located to the west of the capital, is home to 41 moshavim (including the three aforementioned), which had 22.8 thousand residents in 2008. 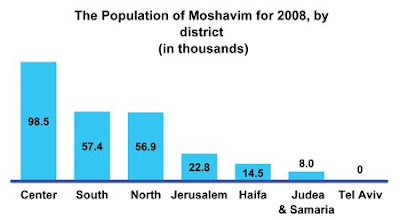