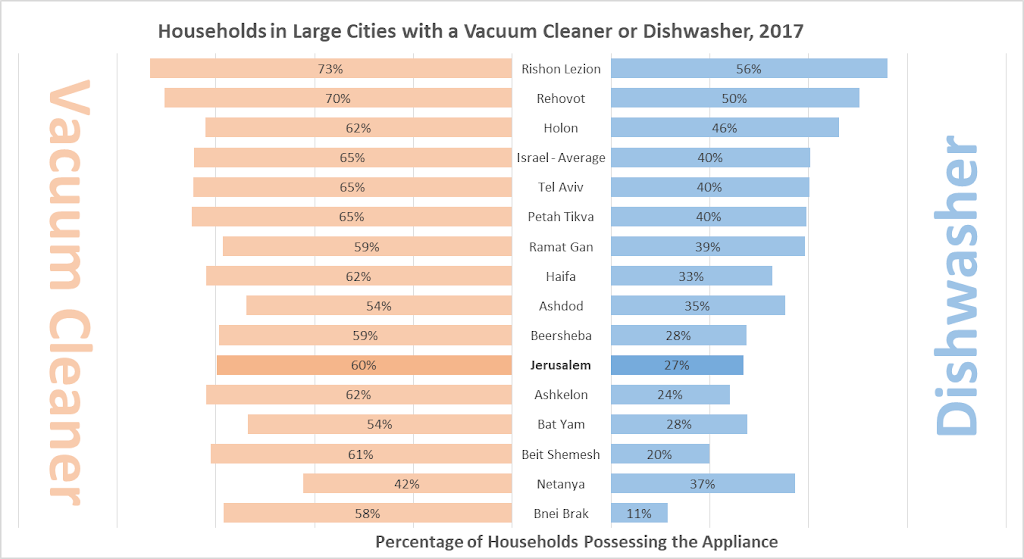 The Pessah holiday is just around the corner and it’s the acme of the cleaning season. In their honor, we have directed our attention to two extremely pertinent household appliances – the vacuum cleaner and the dishwasher.

In 2017, 65% of Israeli households had a vacuum cleaner. The city with the largest number of owners of vacuum cleaners was Rishon Lezion, where 73% of the families had a vacuum cleaner, while Netanya was found to have the lowest number, with 42%. Jerusalem was located somewhere in between: 60% of Jerusalemites suction up their dust with the help of a vacuum. It is interesting to note that over the past decade there has hardly been any change in the rate of vacuum cleaner ownership. In 2007, 67% of Israelis and 61% of Jerusalemites owned vacuum cleaners. Notwithstanding the general rise in the standard of living, we see only a moderate rise in the amount of vacuum cleaners per household. Perhaps this is due to the advent of various robots which are performing the vacuum function in numerous households. However, since ownership of cleaning robots has yet to be included in the data which is recorded, this is merely a guess.

And what of the dishwasher? In this case, the increase is more pronounced. In 2007, one-third of Israelis owned a household dishwasher, while in 2017, 40% of Israelis had chosen not to wash their dishes by hand. There was an increase in Jerusalem as well – from 22% of the city’s residents owning dishwashers in 2007, to 27% in 2017. Still, this is far below the national average. The record holder is once again Rishon Lezion, where 56% of households wash their dishes in a dishwasher, while Bnei Brak is at the opposite end of the spectrum, where only 11% of households boast a dishwasher, despite the fact that its population is comprised mostly of large families.

Another appliance widely used at holiday time is the deep freezer, and when it comes to owning these mostly top-opening, chest-type devices, Jerusalemites are above the national average. Thirty percent of Jerusalem residents freeze large amounts of food for extended periods. However, this time Bnei Brak holds the record, where 51% of the households were found to own deep freezers in 2017. One explanation may be the high percentage of religious and haredi members of the population who live in these two cities and cook enormous quantities of food in preparation for the Sabbath and holidays.