Segregation Among Jews in Jerusalem

Segregation Among Jews in Jerusalem

We looked into the index of dissimilarity, indicating spatial segregation among groups, between Jewish groups in Jerusalem.

Last week, we looked at the extent of spatial segregation between Jews and Arabs in Jerusalem, compared to the other mixed cities in Israel. Residential segregation in Jerusalem was strong compared to the other cities, and the index of dissimilarity stood at 96%. This number expresses the degree of segregation between Jews and Arabs in the city, and is defined as the percentage of residents from one of the groups who will, theoretically, have to move to another neighborhood so that in each area the ratio between the two groups will be the same as in the entire city. In this column we will try to examine the degree of segregation within Jewish neighborhoods, among the different groups that differ in religious identity – secular, traditional, religious and ultra-Orthodox.

The picture rising from the data is of three populations that make up what we sometimes call the “General-Jewish population” that share the city’s neighborhoods, while the fourth, ultra-Orthodox, is much more separated, or segregated, in terms of housing. It is important to note that the dissimilarity index shows the degree of separation in residence, and not necessarily the degree of exposure of each group to the other group. There are other metrics for examining inter-group exposure. 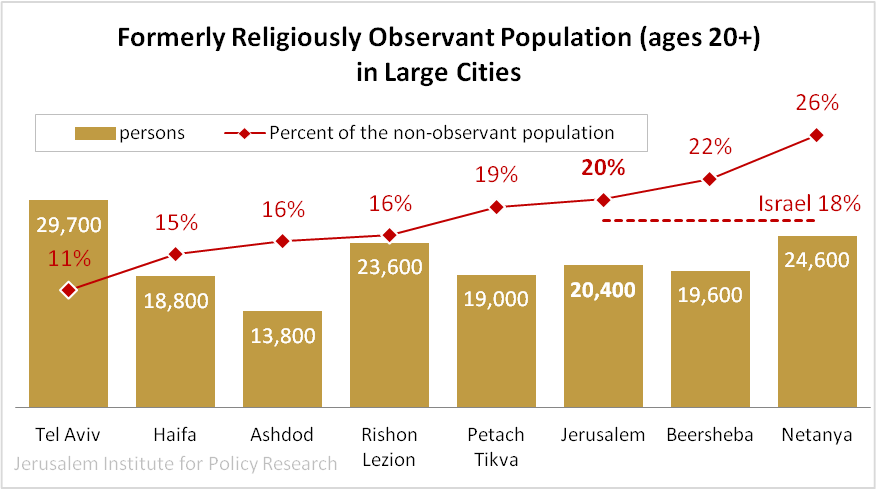 Segregation and Dissimilarity
By: Yair Assaf-Shapira
Jerusalem is a diverse city, yet it is highly segregated in terms of residential neighborhoods. We compared it to other mixed cities in Israel. ...