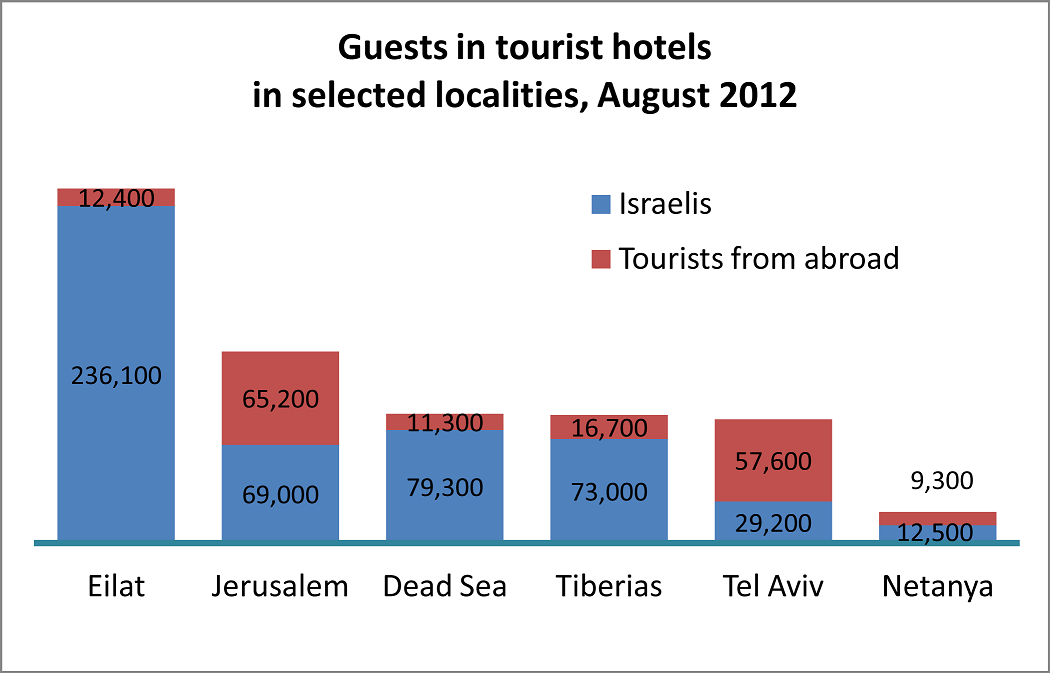 August – Summer camps have just ended, outdoor temperatures are sweltering, leisure and recreation sites are overflowing, and simultaneously Ben-Gurion Airport is filled with throngs of departing passengers. At times it seems that everyone is flying abroad.
It is interesting, therefore, to examine where Israelis chose to spend their summer vacation last year.
The data indicate that about 562,000 Israelis travelled abroad in August 2012. Yet evidently a greater number of Israelis chose to spend August in Israel: 732,600 Israeli guests registered in hotels within Israel (in cities, kibbutzim, and moshavim; excluding rural hospitality, youth hostels, and field schools).
Where did they choose to spend their vacation time? Eilat, the city of eternal sunshine, is the preferred destination of Israelis the year round, and especially in August. A total of 236,100 guests stayed at hotels during August, constituting 32% of all hotel guests in Israel for this month. Two additional destinations of choice for Israelis were the Dead Sea (79,300 – 11%) and Tiberias (73,000 – 10%). Apparently, the high temperatures characteristic of these places in general and during August in particular did not deter the multitudes of visitors who swarmed to these sites. It should be noted that Jerusalem also draws many Israelis and that some 69,000 Israeli guests stayed at the city’s hotels (9%).
Israel’s hotels also hosted tourists from abroad during August, but their numbers were significantly lower than the figures for Israelis – 232,000 overseas guests versus 732,600 Israeli guests. The preferences of tourists differ from those of Israelis, though, with Jerusalem being their first choice. A total of 65,200 overseas guests stayed at Jerusalem’s hotels during August, constituting 30% of the total number of overseas guests in Israel’s hotels. The second-most popular destination was Tel Aviv – 57,600 visitors from abroad (26%), and the third was Tiberias – 16,700 visitors from abroad (7%).
Source: Quarterly Statistical Report on Tourism and Hospitality Services, Central Bureau of Statistics
< Previous Post Computer Use in Jerusalem
Next Post > Apartment prices in Israel

That's interesting,
thanks for the information.

Why "excluding rural hospitality, youth hostels, and field schools"? was it excluded in your study only for Israelis or also foreigners?