Even though Jerusalem has 23,000 more households than Tel Aviv, the number of private cars registered in Jerusalem is about 25% lower than the number for Tel Aviv.  What vehicles- besides cars- are registered in Israel?  How is traffic impacted by the amount of cars on the road?  What about an increase in cars? 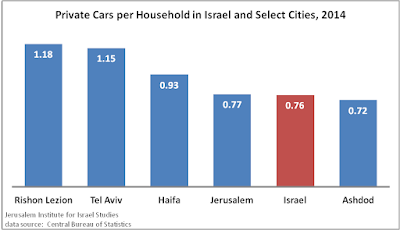 Last August, after years of planning and delays, work began on the first line (the Red Line) of the light rail in Metropolitan Tel Aviv. The complex infrastructure works that are taking place in the heart of the metropolis have raised concerns and tempers among merchants and business owners worried about loss of income and clients. The efforts it took to build and operate the light rail in Jerusalem teach us that the process of constructing a public transportation route in a built-up area that serves as an urban center can be expected to involve difficult labor pains.
Although it has improved in recent years, the municipal public transportation system here is not as developed as that of cities in Western Europe. The limited mobility, in addition to lack of public transportation on Saturday, leads many to purchase a private vehicle. According to data of the Central Bureau of Statistics (CBS), in 2014 more than 2.1 million vehicles were registered in Israel. Some 83% (close to 1.8 million) of these were private cars (neither public nor commercial), and the remainder comprised taxicabs, trucks, buses, minibuses, and two-wheeled vehicles.
In terms of locality, evidently even though Jerusalem has 23,000 more households than Tel Aviv (210,000 and 186,000, respectively), the number of private cars registered in Jerusalem is about 25% lower than the number for Tel Aviv (161,000 for Jerusalem compared with 214,000 for Tel Aviv).
Rishon LeZion – presumably because it is a suburb where many residents work in the metropolis – holds the record for the number of private cars per household, with an average of 1.18 cars per household. Tel Aviv is next, with 1.15 cars per household, and Haifa is in third place at 0.93. The average number of cars per household in Jerusalem is 0.77, slightly higher than the average for Israel, at 0.76.
One can imagine several reasons for the higher number of cars in Tel Aviv: Jerusalem residents are less wealthy on average and therefore less able to handle the expenses of a car. Additionally, Tel Aviv constitutes a center of business, and a profile of its residents includes more workers in free trades, who are willing and able to pay for increased mobility and time saved.
But this is only a partial explanation. Traffic jams are the lot of any city such as Tel Aviv, the core city of a metropolis, just as other core cities throughout the world have to cope with ongoing traffic congestion. In other words, if you live in the inner city, a car might not necessarily improve your mobility in getting around the city, certainly not if a light rail line is being installed. Another reason lies in the system of registering vehicles by address.
The CBS classifies vehicles according to the address of the owner. For this reason, many cars are registered in Tel Aviv, when in fact they are registered in the name of private companies that operate in the city. These are in addition to state-owned cars and cars on lease. In sum, the number of cars in a city provides a direct measure of economic activity in the city, and serves as another indicator of the economic strength of the city.
< Previous Post Municipal Assets – Public Goods
Next Post > A-Tur