What is the importance of the Jerusalem Film and Television Fund?  What major films did it produce?  Between the years 2010 and 2016 the Fund supported the production of eight television series and 48 films. 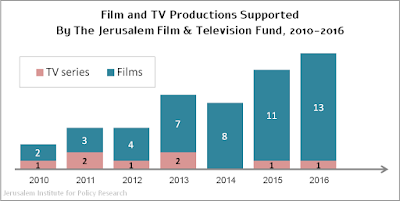 In 2008, The Jerusalem Film & Television Fund set up operations in the city, tasked with promoting the production of audio-visual works with Jerusalem as their focus, and also expanding employment possibilities for Jerusalemites in the film industry.

The Fund’s staff assists local and international filmmakers to produce works for film and television in the city, in the same way that funding bodies and film foundations do in other cities and countries around the world, where they have learned that the production of films and TV series, with their support, contributes to the image of a place, augments the development of a creative society, and positions the locale as a tourist destination. Furthermore, the production of films and TV series in Jerusalem also provides employment for a second circle, comprised of drivers, catering services, hotels, and more.

Between the years 2010 and 2016 the Fund supported the production of eight television series and 48 films, among them international productions (such as A Tale of Love and Darkness, directed by Natalie Portman, and Norman, starring Richard Gere) and animated films, produced at an animation studio that was opened in the city several years ago.

The Fund assists filmmakers by covering some of the production costs, providing guidance and assistance in dealing with bureaucracy, identifying possible locations for filming, and providing connections to industry people who work in the city.