The water tower on Mt. Scopus may symbolize control of the skyline more than the others do, since it is one of the succession of towers along Jerusalem’s eastern range of hills, which includes Agusta Victoria, and the Russian Church and Tower of Ascension. 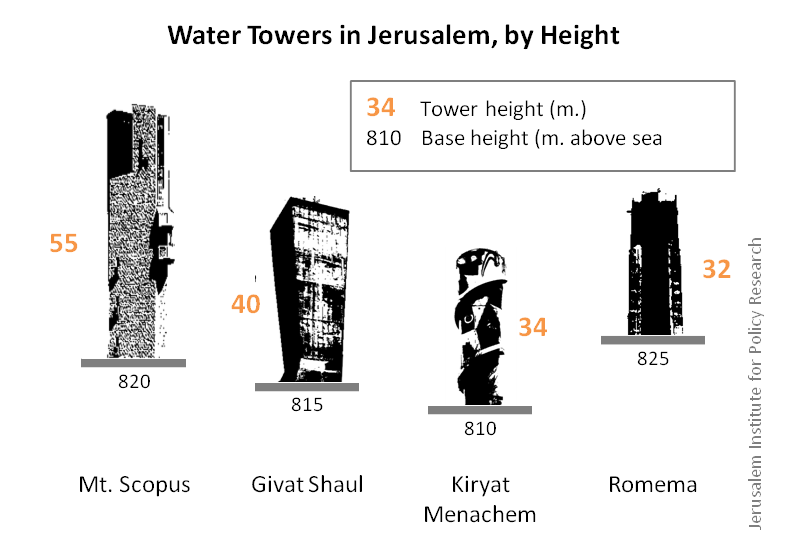 What do Givat Shaul, Mt. Scopus, Romema, and Kiryat Menachem have in common, other than that they are all neighborhoods in Jerusalem? The answer – in each one a water tower stretches to the sky. How high do they reach? The tallest is the tower on Mt. Scopus, located on the campus of the Hebrew University and extending to 55 meters. At 40 meters, the next highest stands in Givat Shaul, and the tower in Kiryat Menachem scrapes the southwest Jerusalem sky at 34 meters. The lowest – which is also the oldest – can be found in Romema, and it stands at 32 meters.

Water towers were erected to regulate the water pressure in inhabited areas, but from the start they had more than one purpose, and in every place where you find a water tower it represents a historic symbol, an architectural monument, a strategic lookout point, and a part of the struggle for control of the skyline.

The water tower on Mt. Scopus may symbolize control of the skyline more than the others do, since it is one of the succession of towers along Jerusalem’s eastern range of hills, which includes Augusta Victoria, and the Russian Church and Tower of the Ascension. Due to its stature and location it was an observation point for the Israel Defense Forces until 2006, and its superior height may be explained by the other purposes it serves. The round and colorful Kiryat Menachem tower has more of a community flavor. It is part of the symbol of the neighborhood, activities are held in its vicinity, and once a year, on Jerusalem Day, the residents climb to the top to enjoy the view. With a completely different persona, the water tower in Romema – which was built during the British Mandate period, close to a large cistern – is inaccessible behind a high fence. As for the tower in Givat Shaul, in recent years it was renovated inside and today it houses a synagogue.

The Hebrew University logo decorates the Mt. Scopus tower, the tower in Kiryat Menachem is graced by the symbol of the Jerusalem Municipality, while the towers in Givat Shaul and Romema have no adornments at all.

While the towers no longer fulfill their original purpose, they remain standing in place to continue to tell their tales.