The Young and the Studious

Main Blog The Young and the Studious

The Young and the Studious

Across higher educational institutions in Jerusalem, the most salient age group of students is those aged  twenty to twenty nine. Slight variations in age distribution can depend on level of observance and military service. 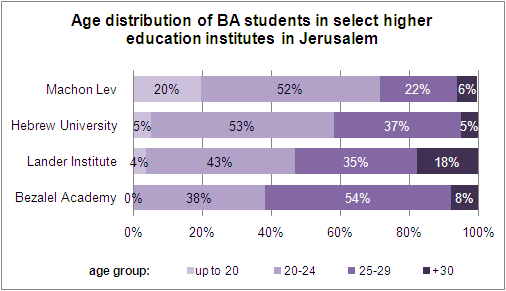 The higher education system is, to a large extent, a mandatory transit point for young people seeking to enter the modern workforce. “Tribal elders” claim that today, as opposed to when they were young, even someone who cleans for a living requires at least a master’s degree. The prevailing assumption is that most college students in Israel begin their studies during their twenties, after completing military service and returning from their post-army world trek, yet before starting a family and entering the workforce.
A review of the ages of bachelor’s degree students in Jerusalem largely confirms this assumption. During 2011-2012, out of a total of 27,000 bachelor’s degree students in Jerusalem, about half (49%) belonged to the 20-24 year-old age group, and another third (33%) belonged to the 25-29 year-old age group. Only 6% of students had not yet reached age 20, the same percentage (6%) as those belonging to the 30-34 year-old age group, and only 7% were 35 years old or older.
During 2011-2012 the Hebrew University had a total of 11,440 bachelor’s degree students, of whom 90% were in their twenties. Only 5% of the students were below age 20, and an additional 5% were 30 years old or older (of whom 3% were in the 30-34 year-old age group).
Twenty to twenty nine year olds stand out as the salient age group among students across all of Jerusalem’s educational institutions. Slight variations in age were recorded at various institutions: Machon Lev (The Jerusalem College of Technology), most of whose students are orthodox or ultra-orthodox, had the youngest students of all. During 2011-2012, among 3,010 bachelor’s degree students, one-fifth (20%) were less than 20 years old, and roughly half (52%) were 20-24 years old. In all, 72% of the students were below age 25. The reason for this age distribution might be that some students have a shortened military service, while the women students might begin their studies during the time of their national service (a substitute for military service) or immediately upon completion. In contrast, the Bezalel Academy of Arts and Design had the smallest percentage of younger students on record. During 2011-2012, only four students (0.2%) were below age 20, and another 38% were in the 20-24 year-old age group. A total of 62% were 25 years old or older.
The Lander Institute recorded the highest percentage of older students (aged 30 or more) during 2011-2012. Out of a total of 980 students, 18% belonged to the 30+ age group. This institute offers evening classes, an option that appeals to older students who combine work with studies. In contrast, the Hebrew University recorded the lowest number of older students, with only 5% of its students aged 30 or above. With the exception of the Hebrew University, Machon Lev again stands out as the youngest institutions, with only 6% of its students aged 30 or above.
< Previous Post Someone to Run With
Next Post > By Bus or Train

What you write and what sites related to school education analysis as well as what you offer truly authentic. friv 7