And what about those who sit in traffic? In 2017, it took about 21% of the employees in Israel more than 45 minutes to reach their workplace. 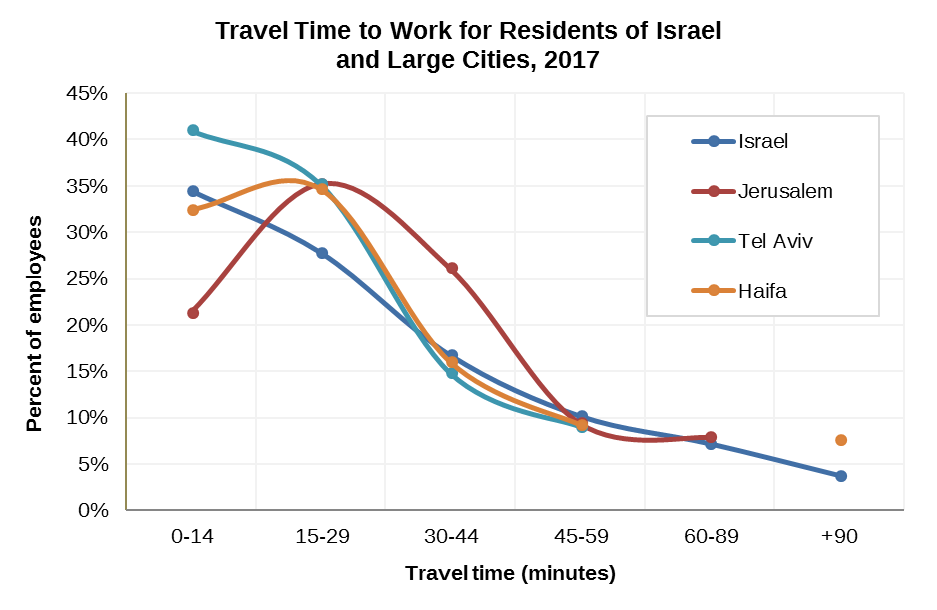 Everyone knows that most Israeli residents sit in traffic jams on their way to work, but an examination of the evidence reveals that the actual situation may be somewhat different.

Data from the social survey conducted by the Central Bureau of Statistics show that in 2017 about one-third (34%) of employees reached their workplace in less than 15 minutes (the data does not include 13% of employees, who disclosed that they don ‘t get to work at the same time every day). Among the residents of the periphery – the districts in the north and south – the number was even higher, with 45% and 41% (respectively) of residents reaching their workplace in less than 15 minutes. This may be related to the high percentage of agricultural workers in these areas.

There is wide variation among residents of the big cities. In Jerusalem and Petah Tikva, fewer than a quarter of employees reach their workplace in under 15 minutes (21% and 24% respectively), in Haifa and Rishon Lezion it takes about one-third of residents (32% and 34% respectively) a similar amount of time, and in Tel Aviv, 41% of residents reported a journey of less than 15 minutes to work.

When considering who gets to the office in less than 30 minutes, we find that it takes most of the employees in Israel (62%) about that amount of time, as is the case for 57% of Jerusalemites, 67% of Haifa residents, and 76% of Tel Avivians.

And what about those who sit in traffic? In 2017, it took about 21% of the employees in Israel more than 45 minutes to reach their workplace. The highest percentages of those who traveled for a similar length of time was recorded in the central district (25%) and the Judea and Samaria district (34%). Among residents of the big cities, less than 20% travel for 45 minutes or more to get to work, except in Netanya (26%) and Rishon Lezion (22%).

Why, then, are traffic jams referred to as “Curse of the Country,” and tremendous efforts made (and high budgets invested) to reduce the phenomenon? Perhaps it’s because those stuck in traffic jams are generally affluent members of the population, including employees which salies justify sitting in traffic; or perhaps it’s related to the visual aspect of stalled traffic – even those who make it to work in ten minutes (eg on foot) notice traffic congestion on their way.