Work in the city

Main Blog Work in the city

Work in the city

Yair Assaf-Shapira
The vast majority of persons employed in Jerusalem are also residents of Jerusalem. Of the 249,000 people who were employed in Jerusalem in 2008, 75% were also residents of Jerusalem and only 25% were commuting to work from outside of Jerusalem – the lowest percentage among Israel’s four metropolitan cities (Tel Aviv, Haifa, Beer Sheva and Jerusalem).
In general, men are considered to have longer commutes to work than women, who are considered to work closer to home. On the basis of this assumption, the reasonable expectation would be that a larger proportion of the women employed in Jerusalem would also be residents of Jerusalem, an expectation which is in fact correct for Tel Aviv, Haifa and Beer Sheva. However, in Jerusalem, the situation is in fact the reverse: of the 114,000 women who were employed in Jerusalem in 2008, 27% resided outside of the city compared with only 24% of the 135,000 men who worked in Jerusalem. That is to say that Jerusalem’s economy drew more women than men from outside the city.
Among women as among men, Tel Aviv exercised the greatest pull: 66% of men and 60% of women working in Tel Aviv were residents of other localities.
But what about the mirror question – how many residents commute to work outside of their city of residence? In 2008, 17,400 of Jerusalem’s residents were employed outside of Jerusalem, of them 12,400 men and 5,000 women. The number of Tel Aviv and Haifa residents who worked outside of their city of residence was much greater – 63,100 in Tel Aviv and 29,300 in Haifa.
Jerusalem differs from Tel Aviv and Haifa in its urban structure, as the two central cities are surrounded by rings of cities and localities that support and are supported by their central job markets and form a metropolitan model that depends on a daily commute to work. While there is a metropolitan Jerusalem area, it does not include any other close, large cities and is no longer linked to Palestinian cities to which it used to be connected, which probably explains why Jerusalem’s job market relies mostly on Jerusalem’s residents.
Source: Central Bureau of Statistics, 2008 Labor Force Survey 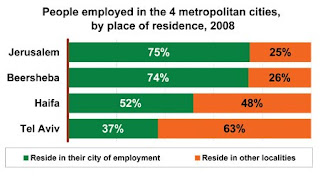