What does a work-life balance look like?  How can it be measured?  In Jerusalem and Tel Aviv, where most of the workforce is service oriented, the percentage was slightly lower. 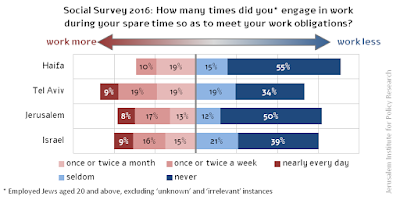 On occasion, or perhaps slightly more often than that, I find myself having work-related phone conversations or sitting down at the computer to complete some task during my spare time at home. I don’t think it interferes too much with my family life, but maybe I should check with my wife and children. Evidently, more than one-third (36%) of working Jews in Israel aged 20 and above (all data relate to this group) reported that they sometimes, occasionally, or often have difficulties participating in family life because of work commitments, according to the recently published 2016 Social Survey of the Central Bureau of Statistics.

In Jerusalem and Tel Aviv, where most of the workforce is service oriented, the percentage was slightly lower (34% and 32%, respectively), but in Haifa and Ashdod, where a particularly high percentage of the workforce is directed towards industry, the percentage was higher (40% and 46%, respectively). And what about the converse situation – poorer work performance because of family commitments? About a quarter of workers reported such problems, with comparable ratios across most major cities.

In practice, it appears that most many of the workers (40%, not including those for whom the question is not relevant) work during their spare time more than once a month (without being paid) in order to meet their work obligations. The tendency to work beyond regular working hours is more prevalent in Tel Aviv (47%), while in Jerusalem it is comparable to the average, in Haifa it is much less prevalent (29%), and in the other major cities it is also less prevalent than in Israel on average.

Are we satisfied with our work-life balance? Among those employed, 57% reported that they are satisfied (45%) or very satisfied (12%) with the balance between work and the other spheres of their life. Jerusalemites reported a higher level of satisfaction (63%), as they have in relation to other topics, while the average in Israel’s other major cities was comparable to overall average.

When I showed these findings to a number of researchers at the Jerusalem Institute, they suggested that I examine men and women separately. I did, and surprisingly, there were no differences – neither in terms of work interfering with family life nor reciprocally. When I looked at workers with children under age 5, I found that the reported level of interference was quite high: 47% cited difficulties participating in family life (men slightly more than women), and 35% cited work performance difficulties (women slightly more than men).
Maintain your balance.