A Private House With a Red Roof

Main Blog A Private House With a Red Roof

A Private House With a Red Roof

One might have assumed that smaller, one or two-story buildings would characterize rural localities. Low-density housing is less suited to urban localities, particularly in light of the depletion of land available for development and the National Master Plan no. 35 for land development which specifies minimal housing density standards.

The hard data, however, clearly indicates that Israeli cities and local authorities have seen low-rise housing construction on a large scale. During 2009 and 2010, 88% of buildings completed in urban localities (compared with 80% in cities) had one to two stories (The data pertains to new buildings and does not include new units added to standing buildings). The picture is even starker when examining the data for all new construction completed during those two years, including rural areas: 93% of all new buildings which accounted for 48% of all new residential units were one- to two-story buildings.

This is not a new trend. The numbers for the past decade demonstrate that a similar percentage of new construction in urban localities (87%) as well as throughout the country (91%) was of one- to two-story buildings.
A possible explanation for this reality may be the efforts of localities to attract wealthier families who generally seek single-home residences. Yet this trend contradicts the declared national planning policy which seeks to increase housing density.

Jerusalem, and its neighboring localities to an even greater degree, have an unusually large number of high-rises. Of all the cities in Israel which saw the completion of more than 20 new buildings between 2009 and 2010, most localities in the Jerusalem region had the lowest percentages of low-rise construction.

By way of comparison, low-risers accounted for 61% of new construction in Haifa, 63% in Tel Aviv and 92% in Rishon LeZion and the overall average for all Israel urban localities was 88%. 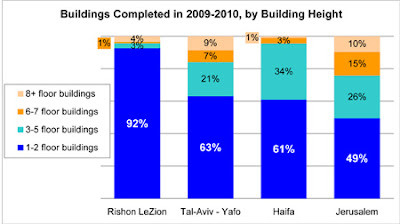