Any apartments to let?

Main Blog Any apartments to let?

Any apartments to let?

The upsurge in the 2009 rental market was felt throughout Israel, without exception.  Still, Jerusalem saw the largest increase, which reached between 17-21% in 2009 alone, depending on apartment size.  The average increase in Israel as a whole ranged between 15-18%, and the increase in Tel Aviv was 14-18%.  Haifa saw a more modest price hike of 10-13% on average.  These low, two-digit percentage price hikes translate into hundreds of sheqels.  For example, a 3.5-4 room apartment in Jerusalem, which averaged a rent cost of 3,100 NIS in 2008, cost 3,700 NIS per month by 2009.

The price hike in the rental market coincided with the upsurge in the housing market.  These changes have had a negative effect on the number of homeowners in Israel.  According to the Israel Ministry of Construction and Housing, the percentage of homeowners in Israel dropped from 73% in 1995, to a low of 66% in 2008.  This, in turn, has increased the demand for rental apartments and, consequently, rent prices as well. 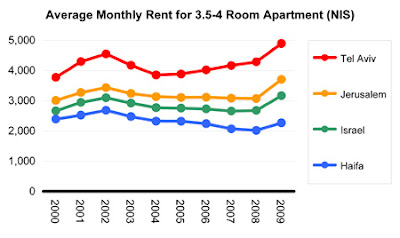