Main Blog The Gates of Jerusalem Welcome You

Jerusalem is naturally one of Israel’s central tourist attractions, and tourism is observably one of the most important growth engines in the city.  The mayor of Jerusalem has set a most ambitious goal of attracting 10 million tourists to Jerusalem a year. Several efforts are being carried out simultaneously in an attempt to meet this goal: the municipality’s tourism budget has been significantly increased, tourist services are being upgraded, permits were granted allowing the construction of thousands of new hotel rooms, a marketing and public relations program is being drafted, and the number of cultural, music and art events is being expanded.

The decade which is quickly coming to a close was uneven, to say the least, for Jerusalem’s tourism industry. The year 2000 brought a record-high number of tourists to Jerusalem, until the outbreak of the second intifada in September, 2000, after which the number of tourists visiting the city dropped dramatically.  The gradual improvement in the security situation during subsequent years and the eventual near elimination of terrorist attacks allowed tourism volumes to inch back up.  By 2008, tourism in Jerusalem had exceeded the previous record, set in 2000.  While numbers waned slightly in 2009, Jerusalem’s tourism scene bounced back in 2010.  During the first six months of 2010, some 650,000 guests spent the night at Jerusalem’s many tourist hotels – 28% above 2009 figures.  The good news is that most of the increase in the number of visitors who stayed at a hotel was due to foreigners, the number of which increased by 40% compared with a modest 2% increase in the number of Israelis who stayed the night at one Jerusalem’s hotels.

The number of room nights sold in Jerusalem in 2010 also spiked, reaching 1,920,000 during the first six months of the year.  These figures demonstrate a 31% increase over the comparable time period in 2009.  The ratio of room nights sold to foreigners compared with those sold to domestic tourists was 86% to 14%.  Perhaps not surprisingly, the average number of nights foreigners spent at a hotel was almost double that of Israeli travelers, with 3.3 nights compared to 1.7. 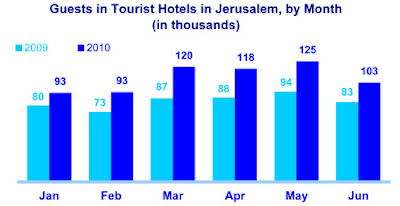