The percentage of licensed drivers in a particular locality or city is clearly linked to its socioeconomic status.  The highest percentages of licensed drivers (among persons aged 18 or older) were recorded in Kokhav Ya’ir, Shoham, Tel Mond, Even Yehuda, Ra’anana, and Modi’in-Maccabim-Re’ut, all of which were in the 90-97% range.  (The list excludes localities with fewer than 10,000 residents.)

Conversely, the lowest rates of licensed drivers were found in the Arab localities, Hura, Kuseife, and Jisr az-Zarqa and in the Ultra-Orthodox localities Modi’in Illit, Bnei Brak and Beitar Illit, all of which were in the 23-36% range.  One must also keep in mind that the relatively low rates of licensed drivers among these two populations is a consequence of social and cultural attitudes and norms, as well as socioeconomic factors.

In Jerusalem, 54% of the adult population holds a driver’s license.  As can be seen in the diagram below, the percentage of licensed drivers in Jerusalem is below the rates found in the localities inhabiting Jerusalem’s metropolitan region, to the exclusion of Ultra-Orthodox localities. 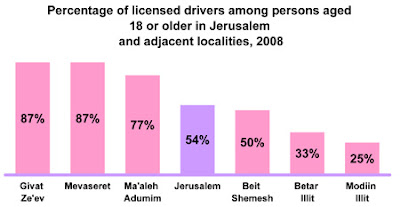