What are the odds that your baby boy will be named David?  Your baby boy would be joining the 287 and counting Davids in Jerusalem.  If he was born in Jerusalem in 2016, there’s a good chance that his name is David, since that was the most popular name for Jewish boys born in that year. 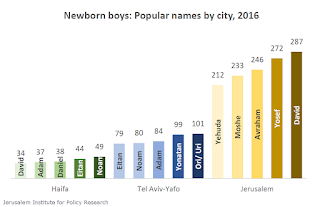