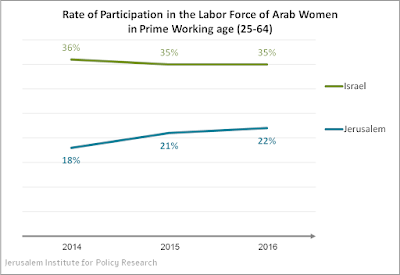 Thirty-seven percent of Jerusalem’s population aged 15 and over are Arabs. This population is characterized by large households, with an average of 5.2 family members, and a high poverty rate, which reaches 82%, compared with the overall poverty rate in Jerusalem, which is 49%. The high rate of poverty among the Arab population is attributed mainly to the low participation in the labor force among Arab women, and to unskilled employment, which offers low salaries.

In recent years, the government has been making efforts to reduce unemployment in general and among Arab women in particular. Indeed, the overall employment rate has risen in the past decade, as has the employment rate of Arab women, which was only 23.4% a decade ago, according to the 2010 Report of the Committee for Examination of Employment Policy.

Notwithstanding, among Arab women in Jerusalem there’s been no significant change in employment rates in recent years, and the rate still hovers around 20%. It appears, then, that official policies have not achieved their desired effect. Whether this is due to the ineffective implementation of city ordinances or due to their lack of suitability to this specific population is still unknown.

One barrier leading to the failure of these policies is the language barrier. Most east Jerusalem residents study in schools operating according to the Palestinian system, which does not require Hebrew studies. This barrier prevents their integration into quality jobs in the western part of the city. In addition, dropout rates at east Jerusalem schools are extremely high, and as a result 43% of the Arab women aged 15+ did not graduate from high school.

This lack of Hebrew-language skills poses a huge barrier for east Jerusalem women who are interested in vocational training, which would enable them to be hired in skilled jobs. One of the prerequisites for them to receive a vocational certificate at the end of the training courses is having completed high school.

Arab women must also overcome additional barriers, such as preferring to work in the eastern part of the city, which would offer them an increased sense of security. A third reason employment rates aren’t rising is that Arab women tend to leave their jobs or stop their vocational training when they get married.

Moreover, data show that there has been an increase in unemployment rates among Arab women in Jerusalem (women who are actively looking for work but cannot find a job). In 2015, the rate was 4%, but rose to 9% in 2016. This data might indicate a positive trend in which more Arab women have begun actively looking for work in Jerusalem. Alternatively, these numbers could also indicate that more women are having a hard time finding work.

Needless to say, the economic contribution made by Arab women who work in Jerusalem is significant. A study conducted by The Jerusalem Institute for Policy Research estimates that the integration of Arab women into the job market in the short term could increase city revenues by NIS 457-643 million a year.