Is the arona business tax fair?  Which part of Jerusalem owes the most in arona taxes?  Arnona (municipal tax) is the main source of regular income for Israel’s local authorities, including the Jerusalem Municipality. 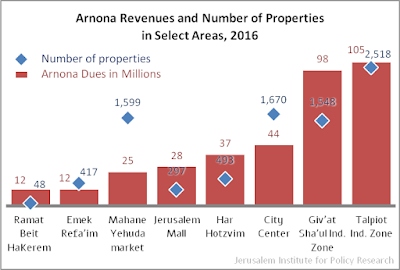 Arnona (municipal tax) is the main source of regular income for Israel’s local authorities, including the Jerusalem Municipality. Residential Arnona, however, does not typically cover the cost of the municipal services provided to residents. The rate for non-residential properties differs from the rate for residential homes. For this reason, local authorities compete for Arnona from businesses: businesses pay more and use relatively few municipal services.

Which part of the city generates the most Arnona for the Municipality of Jerusalem?

The amount generated depends on the types and sizes of properties in each part of the city. For example, places of religious worship pay the low rate of NIS 63 per square meter, while offices and commercial businesses larger than 150 square meters pay the high rate of NIS 334 per square meter. Because the amount due is determined by square meters, the larger the property, the higher the Arnona. In some cases, the rate is further affected by the size of the property: if it is beyond a certain threshold, the cost per meter rises. And in some cases, the location can also affect the rate.

By cross-referencing the number of properties and the Arnona revenues they generated in 2016, we can identify several phenomena. The revenues from the Mahane Yehuda market and Malha mall areas are comparable, at NIS 25 and 28 million, respectively, before discounts. Yet the number of non-residential properties in the Mahane Yehuda area stands at 1,600, compared with only 300 in the Malha mall area – a five-fold difference (!). The reason apparently lies in the large number of small businesses in the market area, in contrast to the mix of businesses in the mall, which has many regional or national commercial franchises.

Moreover, the rumors about the death of the City Center evidently overstated the situation. About 1,670 businesses operate in the triangle formed by the Ben-Yehuda Street, Jaffa Road, and King George Street, generating some NIS 44 million for the city, before discounts.

The largest Arnona-generating areas are the industrial and commercial zones of Talpiot and Giv’at Sha’ul. In recent years the mix of properties in both zones has been continuously diversifying. Today they house auto-repair shops, stores and places of commerce, business offices, some remaining traditional industries, and the beginnings of knowledge-intensive industries. Interestingly, the number of non-residential properties in Talpiot is larger than the number in Giv’at Sha’ul by nearly 1,000 (2,518 compared with 1,548), yet the difference in income generated amounts to only NIS 7 million (105 compared with 98 million, before discounts).