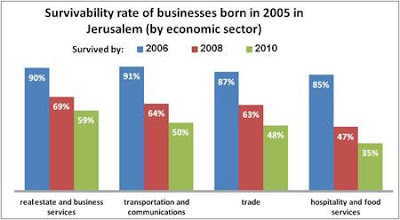 What are the chances of survival for a new business? The data indicate that of all the new businesses opened in Israel in 2005, approximately half closed by 2010. A similar trend took place in Jerusalem, where the survivability rate of a new business was 89% in the first year, 75% in the second year, 65% in the third year, 59% in the fourth year, and 52% in the fifth year.