Main Blog Pension for the Masses 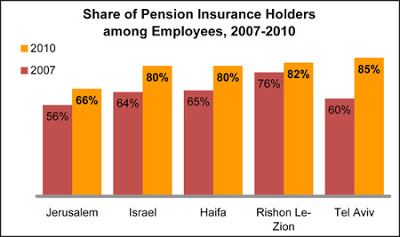 As of January 2008, it is obligatory to provide pension insurance to every employee in Israel. This obligation follows from a July 2007 collective agreement signed between the Histadrut (national labor union) and the Coordinating Bureau of Economic Organizations. The agreement was intended to remedy the hardship faced by thousands of members of the workforce whose employers did not provide pension plans to ensure their financial future. The agreement obligates every employer in Israel to provide a pension plan for its employees and establishes the percentages that the employer and employee must contribute to the pension.

Analysis of the conditions facing employees of human resources agencies (“temp agencies”) reveals that the percentage of pension plan owners among these employees rose from 40% in 2007 to 62% in 2010, but is still lower than the figure for all employees (80%).