Is your dream to live in an apartment building in a vibrant city, or in a private house in a quiet suburb? The recently published CBS social survey for 2019 tried to examine, among other things, the residential preferences of Israelis. We set out to look for an urban life style culture (among those aged 20 and over).

We first examined non-Haredi Jews (including those without a religious classification). It seems that among this public in the big cities in Israel there is indeed a preference for a big city. Among the residents of Jerusalem (54%), Haifa (56%) and Tel Aviv (66%), the majority would like to live in a large urban locality. The majority’s preference for a large city also characterized the other large cities (over 200,000 residents), with the exception of Petah Tikva and Beer Sheva. While it is expected that those who currently live in the city will prefer life in it, is there an aspiration among the other Israelis to live in the city? It seems that the answer is no. Among non-Haredi Jews living in cities and towns with less than 200,000 inhabitants, only 20% would prefer to live in a large city, and the rest would prefer a small urban locality (31%) or a rural or communal locality (47%).

Among the ultra-Orthodox population, the preference is much more urbane, and 50% (in Jerusalem 68%) will prefer the big city. Among the Arab population, there is an even greater gap between Jerusalemites and the rest of the population – while 81% of Arabs living in Jerusalem prefer to live in a large city, among the Arabs in all Israel (including Jerusalem), only 34% are interested in this form of locality.

What about the residence? Here, too, there seems to be a positive sentiment towards the country house. Among non-Haredi Jews, only 19% were interested in living in an apartment building, compared to 46% who preferred a single (detached) house. The rest will prefer a garden apartment (14%), a penthouse (10%) or a cottage (9%). When it comes to the nature of residence, among those who prefer the city, many (22%) seem to be have a warm corner in the heart of the private house or cottage (8%), but the urban living culture prevails, and 34% are interested in living in an apartment building.

In a reality where land is scarce and running out, in and outside the cities, it is important to develop an urban residence culture. Creating dense urban spaces that offer accessibility to a variety of activities, education and employment opportunities, together with high quality of life, will increase the proportion of people who prefer city life. 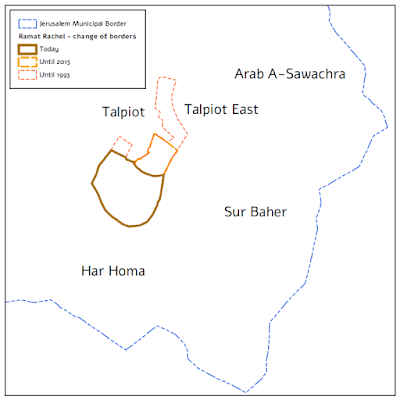 Kibbutz in the heart (of the city)
By: Dafna Shemer
The borders of the city of Jerusalem underwent a significant change 50 years ago, in June 1967.  What was the biggest change that happened in Jerusalem in the last 50 years?  How does a kibbutz fit in...